As counties across southern Montana join the Big Sky Passenger Rail Authority in a push to restore passenger service to the region, other states are launching ambitious goals of their own, recognizing the role transportation will play in future economies.

Montana only has to look to the west for a visionary example, where the states of Oregon and Washington are collaborating on a high-speed rail system between Portland and Vancouver, British Columbia.

Connectivity will be key in the pursuit of economic prosperity, advocates contend, and the Pacific Northwest is taking steps to bring that vision to fruition.

“It’s about a lot more than transportation,” said Roger Millar, Secretary of Transportation for the state of Washington. “It’s about opportunities and connections for the entire mega region, carrying us into the future and providing better access to jobs, affordable housing, sharing resources, increasing collaboration, and addressing more economic prosperity and a cleaner environment.”

Millar, one of the keynote speakers in this week’s Big Sky Passenger Rail Summit, detailed the $50 billion Cascadia proposal, saying it’s easy for critics to label the project as too costly. But like members of the Southern Rail Commission in Louisiana, Mississippi and Alabama, he said such arguments are short-sighted and miss the big picture.

“We will be spending that kind of money on transportation in the next couple of decades. The question is, where do you get the return on investment,” Millar said. “The interesting thing about the ultra-high speed ground transportation network is that it would be less than an hour from Seattle to Vancouver, and about an hour from Seattle to Portland.”

Millar said the states could easily spend large amounts of funding to widen Interstate 5, but it would do little to address congestion, the transportation future, or save commuters time. Nor would it build a stronger regional economy.

Seattle is already served by several Amtrak routes, including the Coast Starlight and the Empire Builder, which crosses Montana’s remote northern tier. But the Department of Transportation in both Washington and Oregon also sponsor and fund the Amtrak Cascade service. 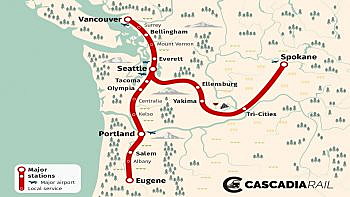 Millar said the service, which runs from Eugene to Vancouver, connects 18 cities and serves around 800,000 passengers annually. It’s one of the few rail systems in the U.S. that serves both the U.S. and Canada.

“We understand regional collaboration because it really has been at the heart of our success,” he said. “We have community support for the service, we have state agencies cooperating, we have local government involvement and elected officials are behind it in terms of funding and policy decisions.”

It’s that same collaboration that members of the Big Sky Passenger Rail Authority are hoping to create in the months ahead as they look to restore service to the state’s southern tier.

Nine counties have already joined the authority and members of the state’s congressional delegation have expressed support for the service, vowing to “lay the groundwork” as Congress discusses a new surface transportation bill.

But while the wheels begin to turn in Montana, the Pacific Northwest is already moving forward. Millar said the high-speed rail project will play a role in the region’s transition to a new economy.

“The system would create a new transportation spine linking the three largest cities in the region with connections to other transportation modes all up and down this corridor,” Millar said. “This is all part of the Cascadia innovation corridor, the mega region here in the Pacific Northwest. We’re really setting ourselves up with a vision of being a global mega region, a hub of innovation and commerce. The high speed rail system is the one that ties it all together.”

The commission was established by Congress in 1982, which gives it special standing to receive federal dollars. Like the Cascadia project, the Southern Rail Commission also enjoys the support of several state governments, their governors and congressional members.

Spain said it was a model the Big Sky Passenger Rail Authority should explore.

“We believe it’s an ideal solution that should be done and that you should consider,” he said. “From a very selfish standpoint, we’d love to see the creation of additional commissions across the U.S. with the idea that ultimately we might create a passenger caucus in Congress representing multiple states and multiple commissions that would give us additional influence, funding opportunities and voices from other parts of he county.”