Plans to guide nearly 20 years of development in a growing area of Missoula continue to move forward, offering what planners hope will provide an array of transportation and housing options that could keep a lid on rising costs.

Missoula city and county planners joined consultants on Tuesday night to offer members of the Consolidated Planning Board an in-depth look at the Mullan Area Master Plan. After four hours, the planning board opted to vote on the plan later in October.

“This is a joint master planning project that both the city and county have been working on together for the past year,” said county planner Andrew Hagemeier. “We were spending a ton of time and evaluation on how development would occur over the next 20 years. In that process, this area just jumped off the map. It’s clear that growth was going to explode in the Mullan area, and it was just a matter of time. We needed to be prepared for it.”

While the area has been growing for the past three decades, starting with large retail centers on North Reserve, areas further west are beginning to fill in. A number of major subdivisions have either been approved or are up for review, and the growth pressure continues to intensify.

But up until the latest planning process kicked off, the city and county had conflicting land use plans. County documents had a lower density of development while areas within the city sought more density and urban style development.

Planners are looking to bridge the gap, offering a blend of living arrangements in what many see as the last area of the Missoula Valley suitable for planned urban development. The plan includes various community centers, green space and amenities intended to reduce one’s need to drive.

“This may be the last time we get to plan an area in the valley of this size,” said city planner Tom Zavitz. “It’s important in a lot of ways. By doing planning out front, we get to address a lot of things. It makes things clear and it’s easier to deal with them going in instead of retrofitting areas that have already developed.” 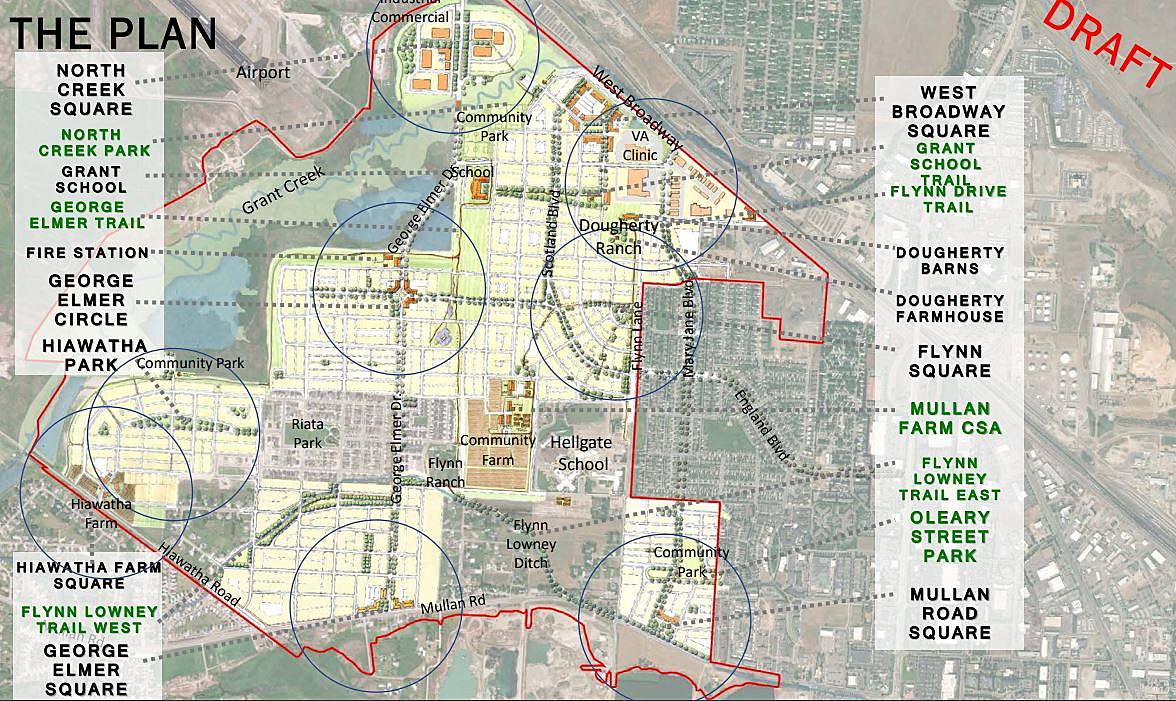 While the plan remains in draft form until adoption, it would accommodate around 6,000 new housing units in a blend of single-family residential and multi-family structures. Without a plan, it’s estimated that just 300 single-family homes would be built in the area.

The plan also calls for five walkable community centers with a blend of retail, commercial and office space. It identifies six miles of new trails, the restoration of Grant Creek and a 40-acre urban farm. The entire area covers around 1,800 acres.

Planners are looking to avoid urban sprawl and provide housing in what many are calling the “missing middle,” which includes more affordable options ranging from condos to apartments.

“What we’re trying to do is reintroduce all these different options in the middle,” said Jason King, a planning consultant with Dover, Kohl & Partners. “You have to couple a physical plan like this with a housing plan that ensures affordability. That’s work that’s still ahead, but we’re hoping to revisit that and encourage that.”

Current growth projections estimate that Missoula will add between 1,000 and 2,000 people a year. The pressure on housing is already high given the city’s limited supply, and housing and land costs have continued to rise over much of the past decade.

“This next round of housing is going to be more expensive by every indicator,” said King. “In terms of affordability, what we’re offering is affordability by design. A lot more units will help satisfy your affordable housing problem, for a period.”

A portion of the area remains undeveloped and played an agricultural role in the past. But most of those properties are now for sale, and agriculture has been absent for years.

Still, members of the planning board remain concerned over the loss of agriculture. Protecting ag through zoning isn’t possible under state law, planners said, though other tools may be available, such as a public bond to purchase open space, impact fees or set-asides required for new subdivisions.

“I think we can find ways to fund some of these acquisitions, but that’s a separate community conversation to have outside this plan,” said Hagemeier. “We have to have the cash to buy it. We can’t zone someone’s property rights away.”

Preparing the area for urban style density could also take the pressure off other areas of the valley that do still play an agricultural role. It could also prevent urban sprawl, which is more costly to develop – and more costly to taxpayers to maintain.

“By focusing development more toward the city, we’re taking pressure off some of the places further out,” Hagemeier added. “By assisting the city by reaching their inward focus goals, multi-modal goals and mixed use goals, it’s going to be easier for us to implement land-use regulations outside this area that do serve agriculture.”