East Missoula residents have united in opposition to a developer’s plans to build more storage units smack in the middle of town along Highway 200 – a use they don’t feel is compatible with their long-term vision for the community.

Hoping for more community-oriented development, residents have launched several petitions with more than 600 signatures in hopes of swaying county officials to deny the storage proposal submitted by Tri-West Inc.

“This is not the vision we have for our community,” said resident Erika Hickey. “I moved to East Missoula more than eighteen years ago, and we’ve raised a family here. We need sidewalks, street lights, small businesses, a market, trees and bike lanes. The last thing we need in our main corridor is another storage unit.”

In late September, Missoula County commissioners reluctantly approved a resolution of intent to rezone 2 acres of highway frontage to accommodate the storage project.

When residents saw the story they took action, handing out fliers, launching a Facebook page and going door-to-door to raise awareness. They also started several petitions, which they plan to submit before commissioners make their final vote in early November. 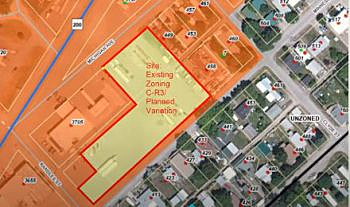 “There’s huge opposition to the proposed plan in our neighborhood,” said resident Stephanie Lemberg, who helped launch the petition. “It’s a wildly unpopular idea. So often things just happen in East Missoula and we as residents lament the changes and wish for things to be different. This is kind of our line in the sand.”

East Missoula residents have held a vision to transform the Highway 200 corridor through town for years. Currently, the corridor includes a loose assembly of uses that have played out over time in an unplanned manner.

The results have led to a disorganized network of structures, roads and parking lots. Sidewalks are missing and parking lots serve as shortcuts. There is no unified landscaping, lighting or traffic patterns, and the corridor is generally unsafe for pedestrians and cyclists.

“People feel like East Missoula is sort of a dumping ground, or not taken seriously and folks out here are tired of it,” said Erin O’Riley Riordian. “They have pride in their neighborhood and they are standing up, and I’m not going down without a fight.”

Both the East Missoula Community Council and Missoula County were working on a zoning update and a corridor plan for the area before the storage request was made.

Residents have participated in the process over time, hoping to craft a community vision and transform the area. The timing of the rezone request from Tri-West has left them frustrated. 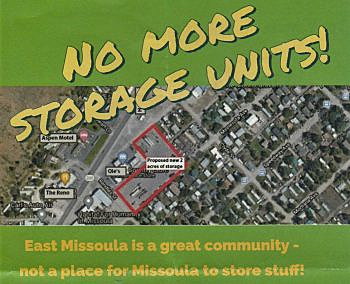 “For the developers to sneak this request for rezoning in just before the plan is approved feels shady,” Slemberg said. “We have acres of storage units in East Missoula already. We aren’t just a place for Missoula to store stuff. Good people live here and we love what we’ve imagined for our community. It doesn’t include an industrial corridor in the middle of town.”

County commissioners expressed similar frustrations in September when the zoning request was first proposed, calling it the “cart before the horse.” They had hoped to have new zoning codes and map amendments done, which could have protected the corridor from more industrial uses.

“What’s on the ground right now may not necessarily align with the vision for the core of East Missoula,” Commissioner Dave Strohmaier said when first confronted with the storage proposal. “There’s this issue of what the long-term vision is for East Missoula.”

The commissioners are expected to consider Tri-West’s zoning request on Nov. 5. East Missoula residents have submitted their petitions to express their opposition to the proposal.

“We want sidewalks. We want some more food trucks or small businesses,” said resident Violet Hopkins. “We don’t want to live in an industrial corridor.