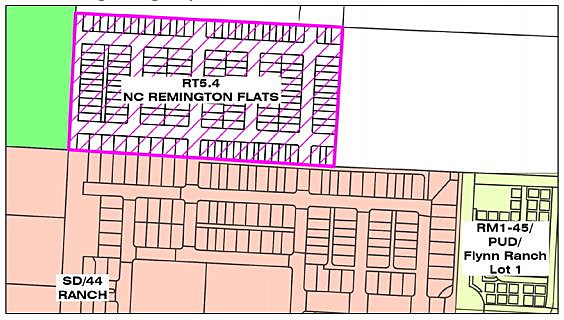 A team of developers is asking the Missoula City Council to approve plans for a new subdivision off Mullan Road – a project that would provide 152 housing units once fully developed over the next 15 years.

The council has scheduled its public hearing for Monday night.

City planners said the subdivision, dubbed Remington Flats, is intended to serve as a “transition area” between the lower density residential area of 44 Ranch and the higher density development proposed in the Mullan Area Master Plan.

Currently, the property is a 20-acre field once used for agriculture.

Brian Throckmorton of 406 Engineering said Remington Flats’ design is meant for young families. That design is reflected in the street concept, with fewer alleys and more front-facing garages equating to bigger backyards.

“If you have young kids like I do, I would rather get to play with them in a backyard versus not having to worry about cars and everything by having them play in the front yard. Currently, our developers are seeing more people requesting a front load instead of an alley load,” Throckmorton said.

In spite of that focus on young families, the planned development won’t come with any parks. Instead, developers will pay a cash fee that will be dedicated to other parks planned in the area.

City planner Dave DeGrandpre said this is because a much larger park than could be accomplished in the subdivision already exists at 44 Ranch. From the furthest point of Remington Flats, the park is less than half a mile, which fits within the city’s guidelines.

Still, the lack of a park in the subdivision frustrated several council members during a recent hearing in the Land Use and Planning Committee.

“It seems patently unfair that one developer can give a substantial amount of land for a park like the 44 Ranch did and that subsequently, the homeowners have put up money to improve that park and put up playground equipment, and then this developer is going to come along and take advantage of all that,” councilor Julie Merritt said.

Neil Miner, the parks and trails development manager for the city, said that with each development, they consider the proximity of nearby parks. A park in Remington Flats wasn’t needed, he said.

“A developed neighborhood park costs about $35,000 a year to maintain,” Miner said. “And so in areas where we are over-parked, we are paying a lot of taxes for maintenance in those areas, and neighborhoods that are under-parked are helping to offset those costs. So in this case, 44 Ranch is the park in that area.”

Councilor Mirtha Becerra raised questions of equity with the decision.

“My big concern is that one of the reasons it has been stated that we are taking the cash-in-lieu of parkland dedication is to allow for these homes to have a lower selling point or having them be more affordable,” Becerra said. “At the same time, I think there’s an equity aspect to it, and that could be precisely the population that benefits from having a playground in a park.”

“I think the idea of improving a bigger park that would get more use versus just an open space is more valuable,” Throckmorton said. “And while there’s definitely different people, I think it would get more use at the 44 Ranch park than having a small one-and-a-half acre park within our subdivision for somebody to have a few dogs at versus having a place for kids to go play at.”

With another subdivision in the works, councilors expressed a concern common in other recent subdivision projects on whether schools can handle an increase in enrollment in the area that development will bring.

Even though the Hellgate School District has said that Hellgate Elementary can take 200 more kids, Becerra, who has a daughter attending the school, said the growth should still be discussed.

“To say there is no issue, I don’t think it is quite accurate,” Becerra said. “ I think that no red flag doesn’t mean that it is all OK.”

Chair of the Land Use and Planning Committee and councilor Jordan Hess agreed that at some point with growth, school capacity will have to be addressed, just not specifically with this development.

“School capacity is a problem to be solved, but it is not an impediment to building this area out per our planning. There’s one school site for an incredibly large area, and at some point, that is not going to be adequate. I think we all are acknowledging that, but I think at some point we need to talk about just that and keep it at the front of our minds.”

And the planned Remington Flats wouldn’t fill up for several years. According to Throckmorton, the area will be done in phases and ultimately finished by 2034.

Throckmorton said after previous phased projects, developers have learned to start furthest back on the property to reduce damages caused on completed infrastructure.

“That’s one thing these guys as builders have noticed within their projects, that as they phase through they really end up screwing up the finished project and running all this construction traffic and equipment that weighs 5,000 times the amount of a regular vehicle on it,” Throckmorton said. “If you can avoid sending those types of vehicles down the road, it saves it in the long run.”