The Missoula Housing Authority and its partners on Tuesday cut the virtual ribbon on a new residential project intended to provide low-cost housing to the city’s neediest residents.

The 12-unit facility, located on Great Northern Loop, represents one of the first affordable housing projects intended to serve the “critically needy” while also targeting a new initiative aimed at carbon offset.

“To see a project like Cornerstone that allows us to make progress in two areas that we’re so invested in at the city of Missoula really presents a model for others to follow,” said Pehan. “It ensures that we’re not exchanging one value for another, but finding creative and unique ways as a community to tackle our challenging goals.”

The project was announced last September but has been longer in the making. It netted funding from a variety of sources, including $1 million from the state’s Housing Trust Fund.

The Missoula Housing Authority will own and operate the facility on a “housing first model.” The approach was adopted by the city and local service providers in 2016 to move people from homelessness into stable living.

“For a long time, we housed people in transitional programs or shelters and that can help with stabilization, but it doesn’t provide them with permanent housing,” said Lori Davidson, executive director of MHA. “Housing first is a permanent housing model where people are housed first and services are brought to them.”

While the project was described as a “drop in the bucket” in meeting Missoula’s larger needs around low-income and homeless housing, it still provides a need by giving 12 individuals a chance to stabilize and work toward a different future.

The selected individuals will be screened through the FUSE program run by the Montana Healthcare Foundation to identify those who are heavy users of taxpayer services, from police and fire to emergency hospital visits.

“We spend hundreds of thousands of dollars a year on those emergency responses,” Davidson said. “If we can get them a stable and safe home, then those needs can be addressed through other service providers on an ongoing basis and we’re not just addressing them on a crisis basis all the time, which is very expensive.” 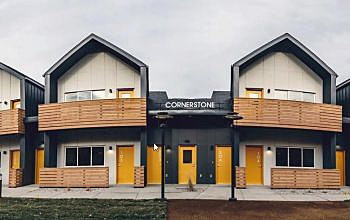 Jim McGrath, also with the Missoula Housing Authority, said the need for low-income and homeless housing will remain high despite the new facility. Several potential tenants are already being screened for occupancy, though hundreds more remain.

“This is 12 units. It’s a drop in the bucket. But if you leave a bucket under a leaky sink, it will fill up,” said McGrath. “There’s no shortage of need, but the idea is to pick up those who need it the most and also have the most significant impact on other services in Missoula.”

The Missoula Housing Authority expects to get a certificate of occupancy next week and have tenants in the building by Thanksgiving. Tenants screened for occupancy must have visited the emergency room 10 times in the last year and interacted with at least two of six local systems, including jail, police, homeless outreach and others.

Those who take up occupancy will find a highly efficient project that took advantage of a new carbon offset initiative. Contributors on that front included Clearwater Credit Union, Climate Smart Missoula and MMW Architects.

“It’s a way to fund those things that wouldn’t have happened otherwise,” said Amy Cilimburg, director of Climate Smart. “We’re going to be looking to get the word out to organizations that want to get that funding and claim that asset. We hope to start growing this program and make it an example.”