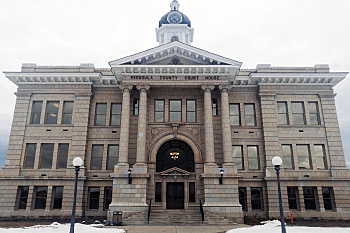 The city and county of Missoula are both taking a second look at security protocols and will likely make a number of changes in the weeks and months ahead.

Missoula County will start by moving from Black Knight Security and Investigation to a new contract with Phoenix Protective Corp. out of Spokane in an effort to tighten access to the downtown courthouse and improve customer service.

“With the five district court judges, two justice court judges and some standing masters, we’re going to continue to move toward that need as the city and county continue to expand and grow,” said Lounsbury. “We’ll also be adding a security desk, or information desk similar to what’s at the Capitol rotunda.”

Security at the state Capitol is situated near the rotunda inside the the main entry. Lounsbury said the county will set up a similar security table inside the courthouse to help county customers find their way through the newly renovated building.

“There will be a primary entrance for folks to get in and be able to get assistance in navigating that building,” Lounsbury said. “It’s beautiful and historic, but sometimes its difficult to find exactly where you’re going.”

Missoula Mayor John Engen said the city is also reviewing its security needs. While neither city nor county officials cited an immediate security risk, the precautions are needed to ensure public safety and that of the city’s employees.

“We’re in the process of sorting some of that, and we’re also in the process of a remodel of our Ryman Street entry,” Engen said. “It’s now and will continue to be the only public entry, just making sure we’re not throwing good money after bad.”