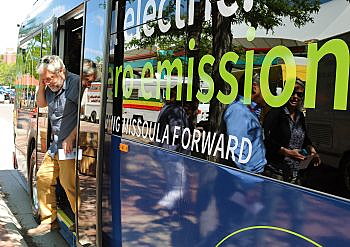 The estimated $3 million that will be raised annually by the mill levy will help Mountain Line add Sunday service, expand current weekend service, increase bus frequency on popular routes and further support their mission of an all-electric fleet by 2035.

“I think that we live in a community that really values accessibility, equity and moving towards more sustainable options.” Shanti Johnson, Mountain Line communications and outreach specialist, told the Current on Tuesday night.

MUTD requested the mill levy after Mountain Line saw a 70% increase in its ridership since the start of the Zero Fare program in 2015. This is in addition to 2017 planning that indicated a community desire for increased bus frequency, full weekend service and expanded service for disabled people and senior citizens.

Homeowners will see the increase in taxes starting in November 2021. The bus service will implement the service improvements in January 2022.

The service improvements will expand weekday and Saturday hours in the morning and nighttime, as well as increase the frequency of Route 4, which runs to the Missoula International Airport through downtown to East Missoula.

The levy will assist Mountain Line in applying for grants for their goal of an all-electric fleet by demonstrating community support with its passing. Currently, the transportation district has six electric buses in its fleet, and plans to add two more in 2021 and another two in 2022.

The mill levy will strengthen the Zero Fare program and be used to meet growing ridership.

It was estimated previously that the levy will create roughly 25 jobs.

“This will be a transformative moment for Missoula, and our first step will be recruiting for those positions made available,” Johnson said.

This is the second mill levy passed since MUTD’s inception in 1976. In 2013, Missoulians passed a $1.7 million mill levy to improve bus frequency and to improve services for seniors and disabilities.

In a news release late Tuesday, Mountain Line general manager Corey Aldridge hailed the win’s impact: “This is a transformative moment for Mountain Line,” he said. “We heard Missoula’s desire for weekend and late-evening service and put together a plan to meet those demands. Now, the voters have given us permission to make that plan a reality.”