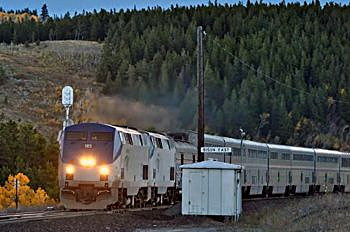 The Big Sky Passenger Rail Authority could convene its first official meeting next month and when it does, half the counties along the old southern route will have a seat at the table.

Powell County on Wednesday became the latest to join the effort to bring passenger rail service back to the North Coast Hiawatha route that ran across the state’s southern tier until 1979.

That brings to 12 the number of counties that have passed a resolution to join the authority. State law requires just two.

“Once we get all 12 county signatures, the rail authority will be a reality,” said Missoula County Commissioner Dave Strohmaier. “We’ll ask all counties to let us know who their appointee will be. My hope is to get all that wrapped up in the next week or so and in December, we’ll convene the first meeting of the rail authority.”

The authority’s official formation culminates an effort that began in the spring when Missoula County adopted a draft resolution and shopped it around to the 24 counties poised along the southern route.

One by one the counties opted to join, with Dawson County in eastern Montana being the first and Powell County – home of the historic Montana State Prison and other attractions – being the last. But even with the authority ready to meet, Strohmaier said late-comers may still join.

“If counties at a later date want to participate, they can petition the authority to join,” Strohmaier said. “It’s about half the counties we reached out to initially. We’ve got just super geographic distribution across the state of Montana.”

From a rural standpoint, advocates believe passenger rail could provide needed transportation to larger cities that sit miles away and perhaps provide some form of economic boost. The outlook is similar in the state’s urban counties, where tourism, business connections and transportation options are vital.

Montana’s congressional delegation has been supportive of the effort, including governor-elect Greg Gianforte. During the Montana Rail Summit held in the fall, Gianforte told attendees that he would work to ensure Montanans had “access to opportunities.”

“One way to achieve that is to ensure infrastructure is in place to support every community,” Gianforte said. “It keeps us connected, from Missoula to Sidney and everywhere in between.”

It originates in Chicago and ends in Sand Point, Idaho, where passengers can choose to travel on to either Portland or Seattle.

“We’ll bring on the Montana State University local government center to facilitate the original meetings. We’ll be starting from scratch,” Strohmaier said. “We need to appoint folks to leadership positions or officer rolls and start some strategic planning. This is exiting. It’s been a long haul.”