With an eye on housing and redevelopment, the City of Missoula is working with the Montana Department of Environmental Quality to clear a Midtown property formerly owned by the railroad from the Superfund list.

The Missoula Redevelopment Agency on Thursday approved up to $36,000 to supplement the Brownfields Assessment Grant to complete cleanup and get the parcel delisted.

“The entire property was listed as a state Superfund site through the Montana Department of Environmental Quality in the mid 1990s,” said Annette Marchesseault with MRA. “Montana Rail Link completed cleanup, but didn’t complete the delisting process.”

MRA described the process of delisting the property through DEQ as both complicated and often unpredictable. But the state agency is working in good faith with the city to ensure cleanup is fully completed and delisting can occur.

The city purchased the property from MRL in 2017 and redeveloped the southern portion into a park and completed the last unfinished stretch of the Bitterroot Branch Trail. The process included the remediation of soils impacted by lead.

Some of the soils were taken off site and some were capped below the current tennis courts.

“The city is now in the positions to look at developing the northern portion of the site for housing and mixed-use development,” said Marchesseault. “To access any funding for that sort of development, the site needs to be delisted.”

Before the city’s purchase, the property was occupied by three tenants, including Sovereign Hope Church and a local business, both of which have moved. The third tenant, Camp Make-a-Dream, remains on site.

The structure that formerly housed the business has been vandalized and is often used by vagrants. The city encountered a similar problem with an old movie theater on S. Brooks Street, leading to its demolition and removal long before any redevelopment occurred.

The city will take a similar approach with the MRL property and has contracted Zilla State and Heritage Timber to move the process along.

“We have folks getting in there and getting into those buildings that don’t have any business being there,” said MRA Director Ellen Buchanan. “The buildings represent a liability because of the condition they’re in.” 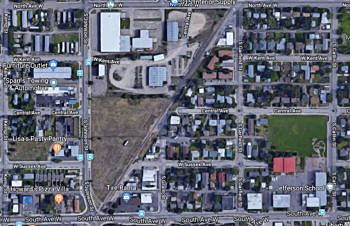 Heritage Timber submitted the top bid to deconstruct the two buildings at $24,800.

All the buildings will be removed at some point to make way for the property’s redevelopment. It’s one of several parcels owned by the city, which is exploring new public-private partnerships to help build housing mixed with retail and other services.

Like the city-owned hotel on West Broadway, the Midtown property is near key services and highly prized for its mixed-use potential.