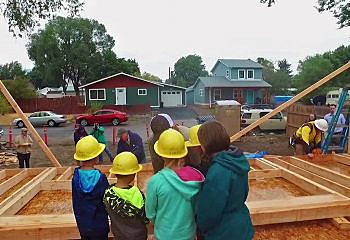 It may take a united effort across a number of fronts for Missoula to begin meeting it’s annual housing needs, and Habitat for Humanity is ready to help.

As the nonprofit eyes its 30th anniversary, it has set an ambitious goal of building 30 new homes by 2030 in a push appropriately dubbed “30 by 30.”

The program was announced this month and will look to unique financing methods to achieve its goal.

“We will take a concerted effort across all sectors to build more homes that are affordable for folks,” said Heather Harp, the organization’s executive directory. “We know we can build homes for $150,000, enabling our neighbors earning $15 an hour a chance at home ownership that remains at 30% of their income.”

Recent housing reports have noted Missoula’s rising housing costs – an issue that exists across the West. The last housing reported released by Missoula Organization of Realtors placed the median price of a home in the Missoula Valley at around $350,000.

“In tackling the issue of affordable housing, we can’t rely on the government sector alone, nor the market sector,” said Harp. “Nonprofits are an important part of the solution.”

Habitat for Humanity currently builds two homes a year, and next year it will increase its capacity by 50% in building three homes. While the 10-year plan may be ambitious, members of the organization said it’s necessary to help fill the gap and grow the city’s housing stock.

The Missoula Organization of Realtors estimates that Missoula needs more than 800 new housing units a year to keep up with the pace of growth. Housing experts at the city and county have said the metropolitan area is falling behind in that need, which is pushing up costs.

The last three years of data compiled by Missoula County and released last week said the region has created only 756 new parcels over that span.

Abby Lynes, the impact and engagement director for Habitat, believes the organization is well positioned to capture unique financing, land donations, grants and other funding to help build more housing in the coming years.

“We envision a Missoula where everyone has a place to sleep at night, and where buying a decent, affordable home is an attainable goal for families,” said Lynes. “With partnership, collaboration and the support of our community, we know we can work toward making that vision more of a reality,”

Since 1991, Habitat has created housing for local families earning 40% to 80% of the area median income. The homes are then sold to families who helped construct them, keeping payments within the family’s means.

The organization’s 30-year mortgage program sets payments at 30% of a family’s income with zero interest and the contribution of 250 hours of sweat equity in building the home.