With Missoula’s growing housing costs and lower wages, many Missoula residents are facing or will face struggles to maintain their current housing arrangements.

In a presentation to the Missoula City Council this week, members of Invest Health Missoula and the city’s Development Services gave a “call to urgency” to accelerate housing efforts based on “startling data” and Missoulians’ personal experiences.

Members of the City Council said they’re running into limits as to what can be accomplished, even with calls to accelerate housing efforts. They’re looking to the Legislature for help.

“What we’re seeing in Missoula is starting to lead even in comparison to what we’re seeing nationally,” said Laval Means, planning services manager of Development Services.

According to the presenters, involuntary displacement has grown in the past years.

One resident, Natalie Stockmann, described her and her roommates “arduous” five-month-long experience trying to find new housing due to their previous apartment’s unresponsive landlord and poor living conditions.

She felt “trapped” after many of their applications to more than 20 places were not answered with a response. After starting their search in March, they found a new place at the end of July.

“At a time like this, it was particularly terrifying not to know what the future holds,” Stockmann said. “This is not a unique story. I know five of my friends who have had similar transitions.”

Another resident, Ethan Siegel, owner of Golden Yolk Griddle, told about his experience after the house his family was renting for years will be sold this month. The landlord initially approached them about his family purchasing the house, which Siegel was “ecstatic” about the stability it would offer.

But then the landlord decided to not move forward with the sale, and the house was put on the market a couple of weeks later by a realtor for $175,000 more than was offered them.

“And you know, we have a realtor ourselves as we’re trying to keep hope that there’s something out there that we can find, but honestly, looking at the market, it’s pretty hopeless right now,” Siegel said. “We’re struggling to think that we’re going to come out at the positive end of this.”

“By the time houses reach the market, it’s too late. Realtors from out of state are bringing people with wages outside of Montana and salaries that we just don’t make here. This is putting us out of contention for this house.”

In the presentation, Means presented a study showing risk of displacement rising in Missoula and Missoula County in the past two decades due to rising median house prices. The study focused on displacement risk ratios (DRR), a value that can track home prices to income.

A higher value indicates home values are increasing faster than income, meaning that long-term residents might be forced out of their housing situation. Missoula County’s 2010 average value of 3.45 increased to 4.53 in 2018, the most recent data point available. 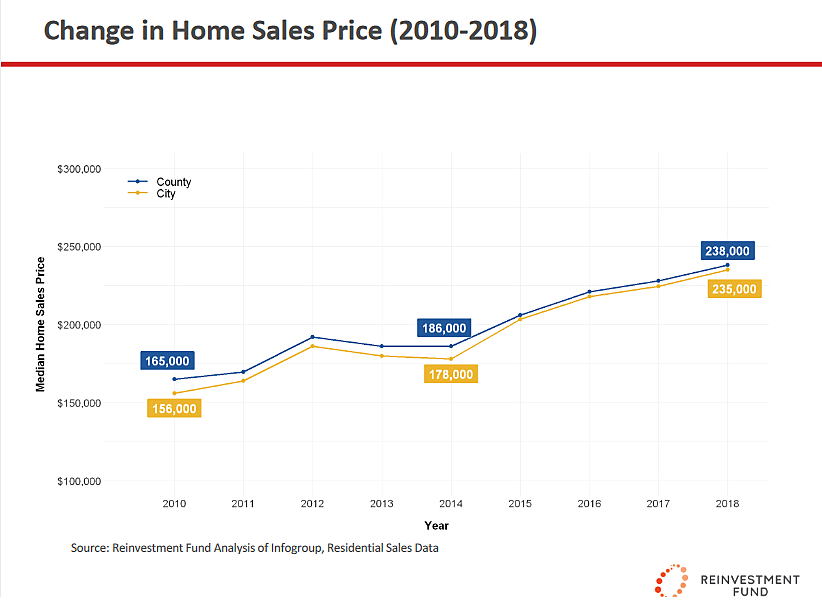 That means median home sale prices are 4.53 times median yearly income, with a majority of Missoula residents earning less than $3,333 a month.

“It represents very rapid housing price appreciation,” Means said. “The research team pointed out that typically when they observe this ratio going above 3.0, residents are likely facing increased pressure from rising home sale prices and rents.”

The study demonstrated high pressure around Missoula neighborhoods like the University District, Rose Park, Northside, Riverfront and downtown neighborhoods, but for Missoula, Means said almost the entire city is facing this pressure.

“The results of the analysis is that virtually the entire city is facing considerable displacement pressures associated with rapidly appreciating home sale prices,” Means said.

Presenters advocated for the City Council to find solutions to address displacement pressures.

Karissa Trujillo, operations and program director of Montana-based Homeworld, Inc., explained such opportunities. She thanked the council for passing the affordable housing trust fund and the subsequent public oversight committee in July.

But she asked for opportunities for more engagement from the community on housing, and for an update and study to zoning and for relocation assistance.

“Lastly, we need urgency and accountability,” Trujillo said. “We need more aggressive timelines to keep up with the pace of change and impacts being felt. The housing policy approved by council needs to be implemented more quickly and be more responsive to changes to both preserve and expand housing options. This takes staff and funding capacity, and more of both should be allocated to make this possible.”

“We need to see that you share our sense of urgency,” Trujillo said. “People here in your community, some of who have shared stories today and others who have not, deserve to know that their home is secure, and their government officials are continuing to step up with them.”

However, some council members said they are reaching limits in what they can do to address housing.

“I am hoping there is outreach to the legislators for the upcoming legislative session, because frankly, there are so many intertwined issues between local and state government on these issues,” council member Gwen Jones said. “ Tax reform is really hard, but the State of Montana needs to take a hard look at it, because we’re butting up against some walls here in Missoula. If they give us the tools, we can do a heck of a lot more at the local level.”

City Council president Bryan von Lossberg echoed Jones, saying they need to meet up with state legislators for statewide solutions, as other metropolitan areas in Montana are likely facing similar issues with the rise in out-of-state residents moving into Montana.

However, council member Heather Harp said the majority of state legislators might not understand the issue with housing at hand.

“What we face here is definitely not unique,” Harp said. “The state representatives do not necessarily understand the conundrum that we are all facing. And very importantly, we have an eviction tsunami that is going to be coming into effect at the end of the year, when the federal moratorium on evictions will be lifted, which translates to one in three people who are renting who are likely to be displaced.

“You have more people on the streets. It means that you need more police and getting more first responders. You need greater levels of mental health care. So it ends up in a great position for taxpayers because now there are fewer that are actually able to pay those taxes. We need solutions based on what we’re talking about today.”

Presenters invited city council members to further discuss the results of the data next week and at a gathering in February.