When Missoula County opened the application period for job retention grants on a December morning earlier this year, the number of businesses seeking support had surpassed the available funding within two hours.

By the end of the period, the county had received 126 applications from local businesses seeking $2.8 million in funding to retain jobs. In the end, 27 businesses were selected to receive a combined total of $625,000 in grants.

“The response to this was absolutely overwhelming to say the least,” said Melissa Gordon, the county’s grants program administrator.

The county on Tuesday approved the 27 contract recommendations and the disbursement of federal funding, which stems from the Community Development Block Grant revolving loan program, not the CARES Act.

In past years, the county has award the funding as loans to help with economic development. But this year, with the urging of county staff, it changed the loans to grants to help area businesses retain low- to moderate-income jobs.

“Given the intense and extenuating circumstances of this historical moment, we’re not doling those loans out but instead, we’re using this money to give as grants to businesses who are in danger of closing their doors or laying people off,” said Commissioner Josh Slotnick.

The struggles are in the numbers, which hint at the challenges many local businesses are facing in the wake of the coronavirus pandemic.

According to the award recommendations, based upon the applications submitted, several local restaurants hinted at possible closure without immediate support, including Scotty’s Table, which has laid off 30 employees this year.

The layoffs left the restaurant with 18 employees and without support, the business projected another 18 layoffs by March, essentially forcing it to close its doors.

The Badlander has seen revenue fall 80% and faced 29 layoffs by March without support, which would essentially leave the business without any workers. The Press Box has laid off 5 employees this year and has seen revenues fall by 70%. 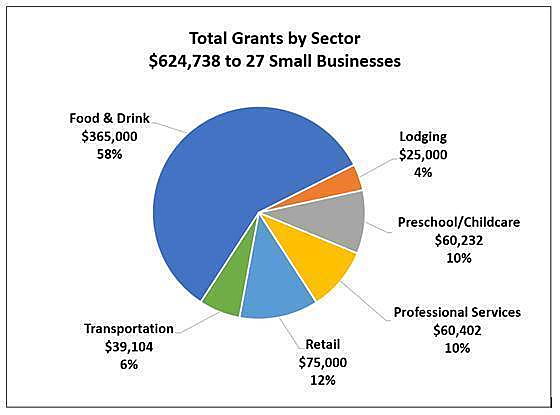 Combined, 58% of the grant recommendations were made to Missoula’s food and drink industry, which has been hit hard by the pandemic. The retail sector also has suffered and will receive 12% of the grants.

Professional services will receive 10% of the grants, while preschool services will get 10%, transportation providers 6%, and lodging establishments 4%.

“We get this isn’t enough money to keep it all going for another year,” said Slotnick. “This is a stop gap until federal money is coming. Hopefully this will staunch the bleeding while we wait for real attention, which is coming from the federal government soon, so it seems.”

After months of partisan debate, Congress on Monday night finally agreed to a new $900 billion coronavirus relief package, which includes $284 billion to small businesses in the familiar Paycheck Protection Program.

Among other things, the support allows businesses a second chance at PPE funding if they can show losses exceeding 25% in 2020 when compared to 2019 revenue. All but three businesses approved for grant funding on Monday by Missoula County have demonstrated losses at or above that amount.

“We would have liked to have done a whole lot more than what we are able to,” said Commissioner Dave Strohmaier. “But we’re going to push over $600,000 out the door to help these businesses.”

According to Gordon, the screening criteria used by the county covered a number of details. The business must be located in Missoula, have 50 or fewer employees, and show measurable revenue losses and risk of additional layoffs.

To qualify, a business could have no COVID-19 violations with the health department, couldn’t be in bankruptcy, and must be current on taxes, among other things. The applications also were considered on completeness.

“Because these were considered on a first-come first-serve basis, it wasn’t sufficient to submit half an application and consider the request in,” said Gordon. “There was the application and four supplementary application materials that went with it. If that was complete, then staff checked each application against 14 criteria.”