The Missoula City Council is slated to consider the McNett Flats subdivision next week, though some members are balking at the timeline and permitted zoning, and they now want the developer to sign agreements over the project.

Some council members say that doing so would offer more predictability over how the project evolves. But some say it will put the the developers in a corner, leaving McNett Flats unable to adjust to changing markets and local demand.

The 20-acre project is planned off Mullan Road alongside other existing or planned subdivisions, and it’s waiting for the city’s final decision for annexation and approval.

But this week, some councilors wanted each phase of the seven-phase project to be approved separately. They also asked for more clarity on what the phases would include.

Representatives of the subdivision repeated what they said during the first hearing — that they can only guarantee what development on one of the lots will look like as multi-family development.

“I really can’t say exactly where it goes from here because I don’t know,” Kody Swartz, an engineer with Woith Engineering, told councilors. “Things are going to change. Coronavirus hit last year and things changed.”

The city’s mixed-use B2-2 zoning allows for residential buildings, like apartments, and a maximum height of 50 feet. The zoning also allows for commercial development.

Representatives said the flexibility offered in such zoning is needed to adapt to market needs. They asked the city to keep it that way.

“We’ll see how fast the market absorbs single-family houses built in the area. Maybe those areas get absorbed super quick in the market and the market is still single family and you shift gears and you go to provide whatever the community needs,” said Spencer Woith, president of Woith Engineering. “Being able to shift gears and provide the housing that the community desires and the community is absorbing, that’s a flexibility we really would like to maintain.” 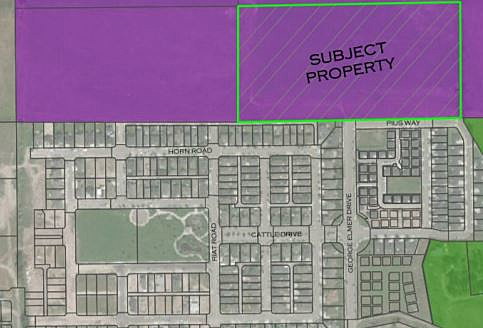 Council member Heidi West said while the zoning works for the property, the sustainability in the future for the residents who will begin to live in the subdivision is a concern.

“I think there’s nothing inherently wrong with B2-2 zoning itself, because it does allow for so many different uses and creativity and flexibility,” West said. “And I think that’s actually super appropriate. I guess what I struggle with is the unknown of just knowing that there could be more than just high density apartments.”

Councilors shared concerns with the planned amount of parkland allocated for the subdivision. Currently, the developers would allocate a 1.5-acre ribbon to parkland on the east side of the development. They would also give cash to Missoula for parks upkeep instead of additional parkland dedication.

“One of my biggest asks would be that the parkland dedication on the east side of George Elmer be something other than a ribbon park next to the street, and that there be a safe space for small children to be able to be outside,” council member Julie Merritt said.

But it could also put the developers into a box if market conditions changed.

Missoula City Attorney Jim Nugent cautioned councilors about being too restrictive if they take such an approach.

“You don’t want to be too stringent,” Nugent suggested. “You have to allow some flexibility if you want to succeed.”