On a unanimous vote, the Missoula City Council on Monday night approved placing impact fees on new development in the greater Mullan area, calling it an equitable way to ensure growth pays for itself.

After more than a year of discussion and planning – and after the county was unable to secure the full amount of a federal building grant – the city turned to impact fees as a way to cover the full cost of laying new infrastructure ahead of planned development.

The Mullan plan is also known by the Salish name Sx͏ʷtpqyen – pronounced S-wh-tip-KAYN – after the area the fees will be implemented. The city and county are also lobbying to rename the Higgins bridge after the Salish word for Bears Tracks, or Sx͏ʷuytis Smx̣e. 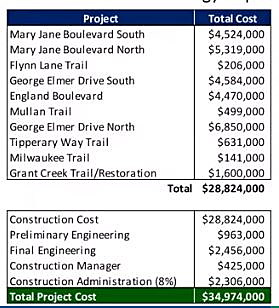 The impact fees, developed in part by the national planning consultant Tischler-Bise, represent a one-time charge placed upon new development to help cover the cost of placing infrastructure ahead of current and future growth in the Mullan area.

The cost of that work, including engineering, is expected to push $35 million. The impact fees will cover roughly half of that cost over 30 years, generating around $18.6 million. The city will apply a $13 million federal grant to cover the rest, along with other in-kind costs and city and county contributions.

The plan gels with various planning documents for the area and will give developers a guide as the area grows.

“The master plan and the grant provide a visionary framework for this area,” said council member Jordan Hess. “The special impact fees help fund that in a way that’s equitable, where growth helps pay for itself.”

“It gets more done more quickly and more equitability than would have happened in the alternative,” said Engen. “It would have been easy enough to abandon large portions of the project and hope for the best. Staff did not pursue that option. They pursued the better one.”