With clear blue skies over the airfield, the inaugural Alaska Airlines flight from San Diego touched down ahead of schedule in Missoula on Thursday, marking another chapter in the airport’s growth.

Alaska’s new nonstop daily service to San Diego is just one new route the carrier is launching this spring. In the coming months, it will also begin service to San Francisco and San Jose.

“It’s a market we’ve been trying to get for awhile,” said interim airport director Brian Ellestad. “California, especially southern California, is a very popular destination, not only for our customers, but customers coming northbound.”

The airport announced the new service last July and began the countdown to Thursday when the first inbound flight from San Diego pulled up to the terminal.

The service into California brings to six the number of nonstop destinations offered by Alaska Airlines from Missoula International Airport. The airline also serves Los Angeles, Seattle and Portland from Missoula.

“A lot of it is that people have discovered the outdoors and want to be outside,” said Ellestad. “A lot of businesses are also relocating to Missoula and Montana. Not only will we have more locals going to California, but it’ll be vice versa as well.

Missoula’s business community for years lobbied for more flights and at one point, it put up revenue guarantee to increase the options out of Missoula. That’s what happened in 2017 when Missoula landed nonstop service on American Airlines to Dallas/Fort Worth.

The route was made possible through a revenue guarantee that included a $600,000 federal grant and a $400,000 community match. Since then, the number of destinations out of Missoula has doubled and the city now has the most affordable ticket prices in Montana, largely due to increased competition.

Both Ellestad and Jensen expect the options to continue to grow. Not only does it give the city’s leisure travelers more options, it also serves to boost the local economy.

“It goes back to people wanting to come here,” said Jensen. “I expect that will continue to be the case. We see a lot of places in the state expanding service, and Missoula is certainly one of them. You’ll see additional announcements coming from the airport in the future.” 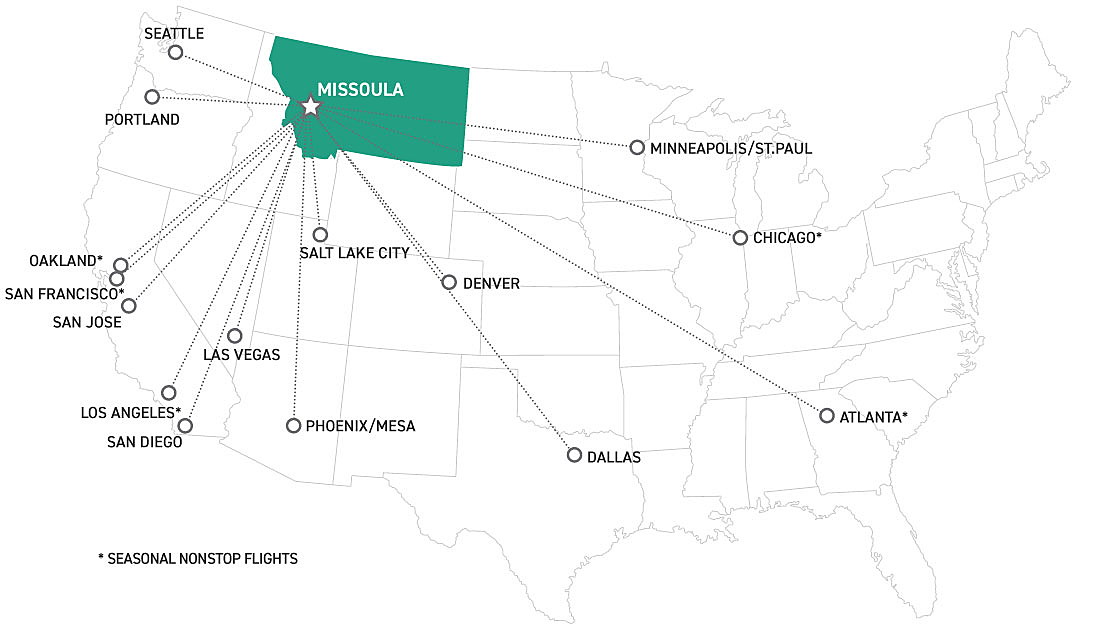 Last month, airport officials hinted at such places as Phoenix and Nashville, just as Allegiant Airlines announced new nonstop service from Missoula to both Portland and Orange County, California.

Allegiant also serves Las Vegas and Mesa, Arizona, out of Missoula. Seasonal service to Oakland and Los Angeles begins in May.

For passengers, the service expansion is welcome.

“We have a vacation home we visit in Big Fork and this is an excellent deal,” said San Diego resident Dave LaGuardia, who arrived on Thursday’s inaugural flight with his family. “With proper advertising and such, you’ll have a good market. We used to go to Seattle and take the turbo prop over, but this direct flight, you can’t beat it.”