With a renovated bridge slated to open this fall and the conversion of Front and Main streets to two-way traffic now in design, the Missoula City Council has added Higgins Avenue to the mix, hoping to improve bicycle safety and traffic flow.

The council this week approved a $200,000 contract with Kittelson and Associates to create a Higgins Avenue corridor plan from Brooks Street to Broadway. The Metropolitan Planning Organization and City Road District will each provide $100,000 to the study.

“We get national expertise from an engineering firm that has done projects like this across the county,” said Arron Wilson, the city’s transportation planner. “This is a key section of the Higgins corridor.”

The latest downtown master plan identified the corridor as an area needing improvement. The current four-lane configuration leaves little room to navigate a vehicle or ride a bike. Left hand turns are prohibited at certain times of the day given the lack of a center turn lane.

“This was an area of focus in the Downtown Master Plan,” Wilson said. “There’s a lot of activity happening, and recent events related to safety and crashes have highlight the need to think hard about what this section of the corridor does.”

The downtown plan suggests that Higgins must transform into a “people place” in order for the Hip Strip to thrive. It states that other corridors, including Orange, Madison and Broadway, already serve in getting vehicles downtown.

“Higgins Avenue on both sides of the river must evolve to be pedestrian scale rather than have the need for cars to dominate everywhere,” the plan states. “Transforming Higgins Avenue into a fully multi-modal and safe street is essential for the economic, physical, and social health of the entire city.”

The plan recommended a number of potential conversions, including reducing Higgins from its current four lanes to three, with one lane running in each direction and a center turn lane. The fourth lane would be used as a bicycle lane in each direction.

Other options include a three-lane conversion with separated bike lanes and removing parking from one side of the street. Another would keep all parking and remove the center turn lane, reducing Higgins to just two lanes.

“The master plan looked hard at this section,” Wilson said. “We didn’t land on any of these options as the preferred one, or complete any deep analysis on how these options might work. The master plan informs the starting point on where we’re going to launch off from that.”

Transportation studies dating back to the 1960s suggest the number of vehicles crossing the Higgins Avenue bridge hasn’t changed much in more than 50 years. Current traffic counts place the daily number of vehicles at around 16,000.

Council member Jordan Hess said the lack of a vehicular increase speaks strongly to the city’s mode-split goals. Among other things, those goals look to reduce the number of drive-alone trips and replace them with other modes of transportation, from biking to taking the bus.

“Traffic on Higgins has not changed, and that’s pretty remarkable given the hundreds of millions of dollars of investment we’ve had in downtown Missoula,” Hess said. “This is the area where we’re actualizing our mode-split goals. It’s a testament on how urban design works and it underscores the need to make the rest of the changes to the Higgins Avenue corridor.” 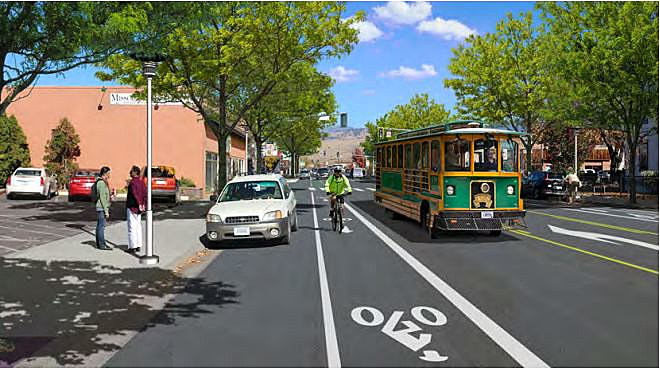 Hess described the corridor as the “epicenter of bike-ped activity in the state” given its heavy use. But the corridor’s current configuration is poorly suited to handle such activity, he said.

The few bike lanes come to a sudden end, offering cyclists little room to navigate traffic into the downtown district or along the Hip Strip. The lack of parking also remains a frustration among businesses.

“There’s challenges for every mode through here,” said Wilson. “Ideally, we’ll get this plan done in nine months or so, and we’ll be well positioned for any federal funding to move this project into design, engineering and construction as quickly as possible.”

The Higgins Corridor isn’t the only transportation project vying for federal funding, if it becomes available from a new infrastructure bill. Earlier this month, the Missoula Redevelopment Agency approved a $450,000 contract with HDR to design the conversion of Front and Main streets back into two-way traffic. Doing so would make the project “shovel ready,” positioning it well for federal funding.

“We can’t get the money put together to get this done with federal assistance until we have a lot of questions answered and we know what we want to build and what it will cost,” MRA Director Ellen Buchanan said of the Front Street conversion.

Members of the City Council have similar hopes for Higgins Avenue and the outcome of the plan.

“It helps us be well positioned if we receive any funding,” said council member Mirtha Becerra. “There’s a lot of interest in funding transportation projects as part of rebooting our economy. It’s time and needed to have this study take place.”