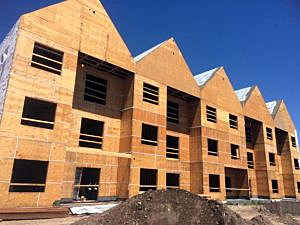 A city proposal to increase the fees it places on reviewing new development in an effort to speed up and improve the process has the general support of Missoula’s development community.

The measure, introduced to the City Council on Monday night, could shave tens of thousands of dollars off the cost of housing by reducing the time a project spends in review.

“We’ve spoken with developers where six to eight weeks could result in savings simply from carrying costs alone of $10,000 to $20,000,” Pehan said. “Those savings either get passed on or the costs get assessed to the eventual homeowner.”

Pehan, who serves as director of the newly aligned office of Community Planning, Development and Innovation, said the proposed fees amount to an average 15% increase across the board.

The resulting revenue is intended to fund the staffing increases needed to complete more timely reviews. That includes two additional planners, an engineer, one parks planner and one senior planner.

“This is a thoughtful, meaningful step in the right direction,” said Mayor John Engen. “The fact that we have members of our community in the home-building business tell us they’re onboard with this plan and process is gratifying.”

Gene Mostad, president of Mostad Construction, has placed his support behind the proposed fee increases. In the past, he said, the process has been clumsy and has been in need of change for years.

Delays in the process have contributed to the rising cost of housing and development, he said.

“With the new computer system for building permits and stuff, implementing that and not having enough staff has really put a crunch on us being able to get building permits and go through subdivision and that kind of thing,” he said. “We still have a long ways to go, but at least we’re heading in the right direction.”

The fee increases are part of a larger comprehensive plan underway at the city to handle growth. Among other things, the development office will present both short- and mid-term goals aimed at staffing, the general review process, and reforming outdated or unnecessary codes.

The later could also lower costs and incentivize the construction of affordable housing. Ideas could include promoting more compact development and reduce parking requirements around certain projects.

“We’re still having some pretty good hiccups in the building process in how things are getting reviewed and kicked out,” Mostad said. “But I’m hoping that within the next six months that we start seeing more success. I support what’s being proposed.”

The City Council will consider the measure next week.