One of the region’s largest mortgage lenders reported a small increase in the number of home buyers arriving from outside Montana over the past year, though the increase dispels the myth that out-of-state newcomers are snatching up all of Missoula’s available homes.

Realtors in Missoula reported similar trends, citing a small increase in out-of-state buyers but nothing overwhelming. They suggested that many of those buyers were former Montanans returning home with a good-paying job.

While data surrounding migration can be tricky to collect, the Missoula Organization of Realtors recently aggregated figures from Missoula’s mortgage lenders and where their customers were coming from.

“We’ve always gone back to use Census data for migration data, but it has an 18 month lag around it,” said Jim Bachand, CEO of the Missoula Organization of Realtors. “We felt like there was so much noise about being a Zoom city, we needed better data quality around it.”

The figures, presented in this year’s housing report, found that one lender was behind nearly 15% of all home purchases in 2019 and 16% in 2020.

“This is enough statistically valid data to give it direction,” said Bachand. “When we were done with this data on the migration side of it, we did a litmus test [within the industry] and they felt it was about right.”

The roughly 6% increase during the pandemic was regarded as an accurate figure by the industry in Missoula.

“There was a slight uptick, and that 6% sounds about right,” said Shannon Hilliard with Ink Realty Group. “A lot of those people were coming back with enough income to afford a home because they were bringing their jobs back with them.”

According to the figures, Washington and California represented the largest sector of buyers arriving from outside Missoula. Oregon, Colorado and Kentucky also made the list, as did Ohio, New York and Illinois. 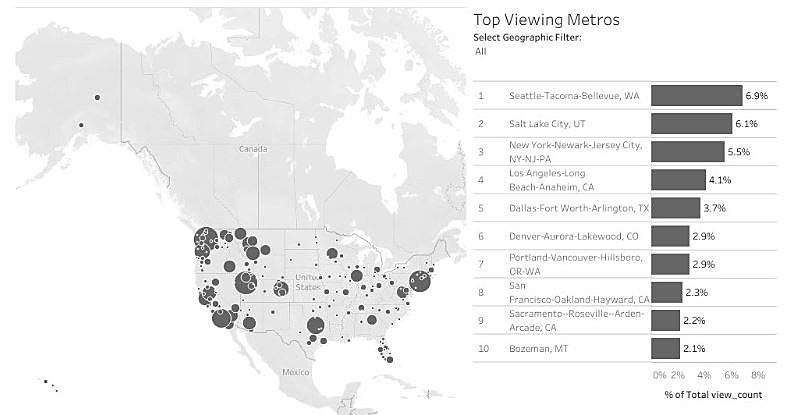 When it came to viewing Missoula as a potential place to live, Seattle topped the list, accounting for nearly 7% of all searches. Salt Lake City followed at 6.1%, with New York, Los Angeles and Dallas rounding out the top five.

Bozeman accounted for more than 2% of all searches on homes in Missoula and landed No. 10 on the list.

“Where people are searching from surprised me,” said Bachand. “I thought Salt Lake was a surprise. Some of the other figures were the number of people within the state looking at Missoula as a potential place to move to to buy a home.”

Regardless of where a buyer originates, the industry in Missoula remains challenged by a lack of supply and rising home costs. The median price of a home in Missoula hit $420,000 for the first time in the First Quarter of 2021.

That’s far less than some of the areas where home buyers are searching from, though it outpaces the budgets of most current Missoula residents.

“I think it’s challenging for potential buyers,” said Bachand. “There’s no doubt it’s a sellers market in Missoula when you look at the low inventory. We as a community must figure out a way to get inventory to build supply at all price points.”

Those efforts have begun, though it will take time for supply to match demand. Several large units of affordable housing are under construction, including the Vallagio and Trinity projects which together will bring nearly 400 new units to the market.

The city and county also are laying the infrastructure needed to support as many as 6,000 new homes in the greater Sx͏ʷtpqyen area. A number of subdivisions have been approved in the area and already are seeing construction.

“The Sx͏ʷtpqyen project area is going to relieve some of that pressure, but it’s not short term,” Bachand said. “We’re not going to be able to put a house up in two weeks. The reality is, its not there today.”