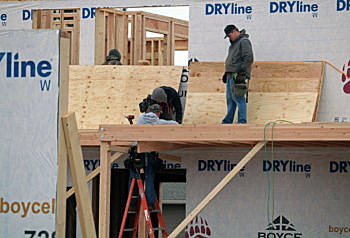 The groundbreaking of three affordable housing projects in Missoula last week and a master plan pending for a fourth project on former city property has officials feeling optimistic about efforts to move the dial on affordable housing.

The county will also receive an update next week on the creation of its own housing policy, and both governments hope to direct some funds from the American Rescue Plan Act to aid local social programs.

“We’ve received a number of ARPA requests,” said Missoula Mayor John Engen. “As we talk about how we’re going to work together to shore up the various (non governmental organizations) with whom we’re working on a variety of projects with, we’ll have some interesting things to consider and some interesting opportunities.”

Engen said a number of requests have already come in seeking funding, including the Poverello Center and the Community Food and Agriculture Coalition. The city may also consider allocating some funding toward rental assistance.

“We’re working on all of that stuff but the state has not issued any guidance yet,” said Dale Bickell, the city’s CAO. “While we have some projects in mind, we don’t know what the rules are still related to these ARPA commissions that were set up at the state. Until we know that, it’s hard to say what we’re actually going to try to apply for.”

The county will weigh its own requests.

“It’s still premature how those will shake out in terms of priorities and such,” said Commissioner Dave Strohmaier. “We’re still trying to figure out our process by which we’ll consider any of those requests.”

Housing will likely have a place when the funding is issued, though it’s too soon to know exactly how and where that may be applied.

In the meantime, efforts to alleviate Missoula’s shortage of affordable housing took a significant step forward last week. In the next two years, more than 400 new units will enter the market.

Among them, housing officials broke ground on the Trinity project, which will place 202 affordable rental homes on two sites, including Mullan Road and Cooley Street. Construction also began on the $54 million Villagio project at the north end of Scott Street. That project is expected to house around 700 people in 200 units.

Bickell said the developer partnering with the city on a 9-acre housing project off Scott Street has also begun the master planning process. The city purchased the property for around $6 million last year and has partnered with Ravara Development LLC to provide around 70 units of permanently affordable housing, along with several hundred market-rate units.

“They’ve hired their design team and they had their kick-off session last week,” Bickell said. “They put together a great design team and we’re working toward a conceptual site design. We’ll be designing our public process when they do the master plan for that project here in the coming weeks.”

The city adopted a housing policy two years ago and the county is looking to follow suit. In February, it hired ECONOrthwest out of Portland to develop an affordable housing strategy.

Chris Lounsbury, the county’s CAO, said the process is winding down the county will receive an update next week and proposals expected in the new policy.

“There will be some data coming out of that work for areas outside the city,” he said. “It will help inform the more comprehensive work we’ve been doing on the urban fringe and out into the county.”