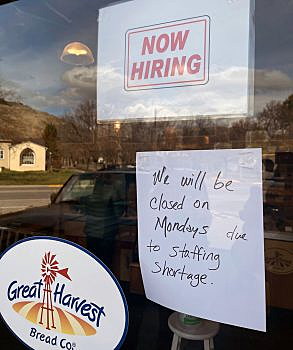 The Montana Department of Labor and Industry on Friday said total employment for Montana grew by 1,800 workers, not quite as much as the labor force. As a result, unemployment grew 0.1% last month to an overall 3.7% unemployment rate.

“More and more Montanans are coming back into our labor force — very encouraging news for employers across the state trying to fill open positions in the midst of the summer tourist season,” said Department of Labor & Industry Commissioner Laurie Esau.

The department also reported initial payments issued under the state’s new return-to-work program. Those who were unemployed as of May 4 and reenter the workforce – and hold a job for four weeks – should receive $1,200.

The department told MTN News on Thursday that it had approved 21 applications under the program and dispersed $21,600. It also rejected 29 applications but didn’t state why.

The program was launched earlier this year in an effort to help businesses fill vacant positions. The state stopped issuing supplemental $300 weekly payments to unemployed claimants, and it stopped participating in the federal Pandemic Unemployment Assistance program.

Those still claiming unemployment must be actively seeking a job.

The changes are aimed at helping fill thousands of vacant positions. With the workforce shortage, some businesses have reduced hours, dramatically increased wages or cut back on production.

“Getting more Montanans off the sidelines and into the workforce will be key to Montana’s continued economic recovery.”

While the labor front is showing slow signs of improvement, inflation and rising costs could put a damper on economic recovery, officials have said.

In its latest report, the price of used cars and trucks saw a 10.5% increase in June. Food and energy prices also rose over the month. The index for all items less food and energy, referred to as core inflation, increased 0.9% in June.