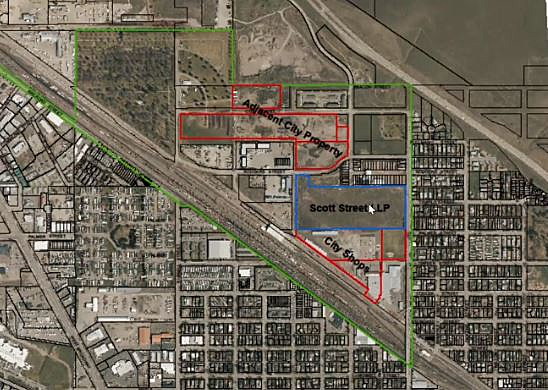 A 9-acre redevelopment project with a sizeable housing element continues to move forward in Missoula’s Northside neighborhood and, as it does, the area’s future transportation grid is taking shape.

Ellen Buchanan, director of the Missoula Redevelopment Agency, said the 9-acre housing project planned by Ravara in partnership with the city is moving through the regulatory process, including issues around streets and land parcels.

“To accomplish what we want to accomplish out there, we’ll have to do some subdividing, even after the city does the right-of-way dedication that creates the big tracts of land,” Buchanan said. “There’s a fair amount of regulatory stuff to get through, but it’s moving forward.”

The city purchased 19 acres off Scott Street in 2020 for around $6.3 million, and it approved an agreement with Ravara in 2021 to develop 9 acres into a mixed-use housing project with an element of affordability.

The city plans to retain roughly 10 acres to consolidate a number of departments, including Public Works. The city’s development and that planned by Ravara will play out side by side, and the two are working together to streamline the process.

Doing so will result in two tracts of land within the Ravara development, including 6 acres and 3 acres.

“The six acres will house approximately 230 multi-family units,” said Buchanan. “Workforce housing is the goal, with a large mixed-use component, which will include somewhere in this development child care.”

The 3-acre lot will including affordable housing, which remains one of the primary goals of the Ravara development.

“The 3-acre parcel will be owned by a community land trust and include 70 units that are for sale as permanently affordable townhomes or condominiums,” Buchanan said.

The community land trust is a model that has been used in other parts of Missoula. It allows households to own their own home while the land trust retains the land. The result lowers the cost of housing and makes the units more attainable.

“We’re working with InterUrban Design for the market-rate and commercial side,” developer Kiah Hochstetler said in July. “We haven’t identified all the parties to deliver the community land trust portion. But across that, there’s a myriad of different financing pieces we’re working with to deliver this.”

Partners in Housing: Ravara, City of Missoula team up on Scott Street project