A developer won approval to construct 744 storage units on a vacant parcel off Highway 93, and while the county would rather see other forms of development on the parcel, traffic at the intersection of Rowan Street remains a larger concern.

Commissioners approved the request from Forrest Robinson, where he plans to build the project on 10 acres of vacant ground at the intersection of Highway 93 and Rowan street.

The intersection is already one of concern, and with the storage project now approved and a possible brewery and food option planned on a nearby lot, the concerns are expected to grow until action is taken to address highway safety.

“It’s a bit of a death by a thousands cuts. At some point in time, cumulatively, we’re going to have a real problem,” said Missoula County Commissioner Dave Strohmaier. “In a perfect world, we’d have some regulatory triggers that would kick in to require some kind of traffic study or analysis.”

Glen Cameron, a traffic engineer with the Missoula District of the Montana Department of Transportation, said Rowan is a county maintained road while Highway 93 falls under the department’s jurisdiction.

The agency would like to work with the county in addressing concerns at the intersection, and Cameron urged the county to write a letter to MDT requesting a traffic study. 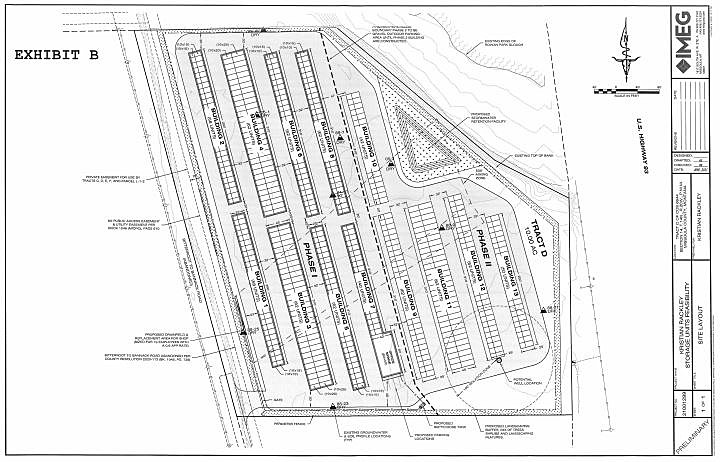 While traffic concerns along the Highway 93 corridor play out as more development makes its way to the area, the storage unit will move forward with county approval.

As planned, the project will include 13 mini-warehouse buildings that will accommodate a total of 744 storage units once finished. It’s planned in two phases, including 466 units in Phase 1 and 287 units in Phase 2.

Representatives of the project said the developer will take steps to “soften” the impact of the development.

“The design and material quality is of the applicant’s upmost importance,” said Daniel Fultz with the IMEG Corp. “They also plan to pave the entire project. They do want to plant trees around the perimeter to soften the impacts.”

The county approved the project with various conditions, including adequate water for fire suppression.

“Storage units are my least favorite types of development on the landscape,” said Strohmaier. “But I’m encouraged to hear you’ll be pursuing efforts to make it as a nice as possible. We’ve seen plenty of not nice ones out there.”