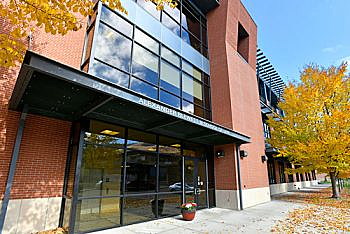 (Daily Montanan) The University of Montana provost announced Tuesday the interim leadership at the Alexander Blewett III School of Law will be a trio of professors: Monte Mills, Sara Rinfret and Cathay Y.N. Smith will serve as acting deans as of Oct. 25.

“I’m grateful to Professors Mills, Rinfret, and Smith for stepping forward at this critical time to ensure the Blewett School of Law will continue to fulfill its mission for students, the legal community, and the state of Montana,” said Reed Humphrey, acting provost and vice president for academic affairs, in a campus email. “I’m confident this leadership team will make progress toward a fresh start and a new era of excellence for the Blewett School of Law.”

Paul Kirgis stepped down as dean on Oct. 6 and announced in an email the following day that Sally Weaver also would be leaving her post as associate dean of students. The resignations came after a student protest and after current and former law students and a prominent former faculty member raised questions about the law school’s leadership.

In particular, three women told the Daily Montana they brought sexual assault and harassment allegations to Kirgis and Weaver, but the administrators deterred them from taking complaints to the Title IX office, which handles such misconduct on campus; the administrators denied the claims.

“The details of her role through the rest of her contract are yet to be determined by the new Law School leadership,” said UM spokesperson Dave Kuntz in an email.

In his announcement, the provost said the law school provides nationally-ranked programming and serves more than 500 students in law, policy, and public administration. A separate earlier email from the Office of the Law Dean said a national search for dean will take place, and the goal is to select a candidate who can start as dean the next academic year.

“The last three weeks have been some of the most challenging many of us have faced,” said the email. “Despite our diverse interests, perspectives, and professional backgrounds, we share a real passion for this place and the amazing students and colleagues with whom we have the privilege to work. The additional stress, anxiety, and distractions caused by recent events have been difficult, and we recognize the impacts they have had on our entire community.”

In his announcement, Humphrey noted the interim leaders were selected after discussion among the Blewett School of Law faculty. The earlier email to the School of Law noted Mills will serve as acting dean of students; Rinfret will be acting dean of public administration and policy; and Smith will take on acting dean of academic affairs. (It said current Associate Dean of Academic Affairs Jonathon Byington would step aside for an unrelated family health matter.)

“Professors Mills, Rinfret, and Smith are respected colleagues who are highly regarded in our community,” Humphrey said in the email. “They will help guide the Blewett School of Law over the coming months as a national search for a permanent dean takes place.”