While Missoula’s economy weathered the pandemic better than most and has recovered faster, one issue remains a challenge for area businesses – a lack of employees.

Signs posted around the city promote wages not seen before the pandemic. Some businesses have reduced hours of service for lack of workers, and some have closed their doors for good.

Bryce Ward, an economist with the University of Montana’s Bureau of Business and Economic Research, on Thursday said a number of factors are at play, from pandemic-related mortality to an increase in self-employment and a shrinking labor pool – the later possibly driven by Missoula’s cost of housing.

“It’s going to be really difficult to return employment to pre-pandemic levels or greater without a large labor force,” said Ward. “It’s tough to drive unemployment lower than where it’s at, so we have to figure out what’s going on with the labor force.”

During the initial Covid phase, employment in Missoula fell by around 15%, though it rebounded to nearly 95% of normal by the end of last summer. It has since slowed and job postings are 60% higher now than pre-pandemic levels.

According to the latest State of Missoula’s Workforce study commissioned by the Missoula Economic Partnership, the average hourly wage in Missoula rose from $24.12 last February to $26.75 this June.

But despite the hot job market, workers remain hard to find. While deaths related to Covid reduced the national labor force by roughly 5%, an estimated 960,000 workers over the age of 55 with a bachelor’s degree have dropped out of the labor force, Ward said. 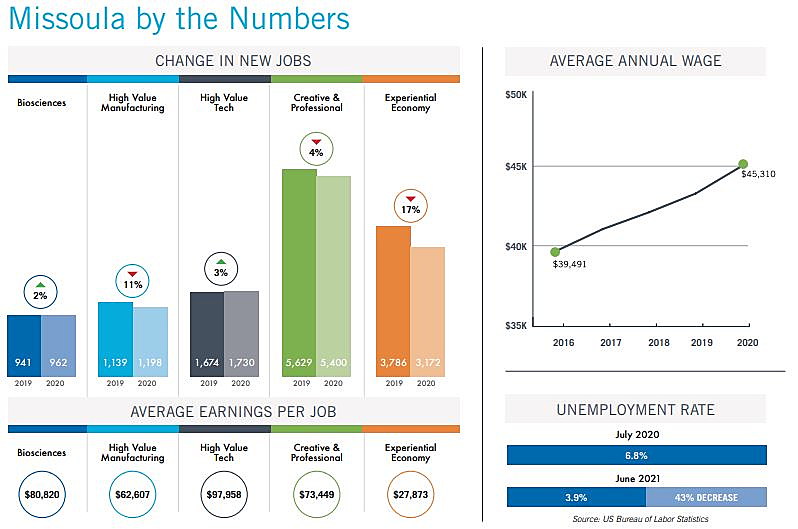 Among younger workers, recent surveys suggest a good number of them intend to return to work. When they do, it’s expected they’ll help alleviate the worker shortage. But Ward said the same isn’t true among older workers, who may be gone for good.

“Among that population, it does appear they’ve drifted further away from the labor force,” he said. “We have a population that’s really decided that it doesn’t want to work and there’s not a lot to change their mind. We may see a persistent gap in the labor force going forward, and we’re going to just have to adapt to it.”

“Almost every industry in our community was poised for growth last year,” said Grant Kier, CEO of the Missoula Economic Partnership. “Their products and services were in high demand, but many struggled to identify and find the workforce to come and help them.”

Ward said a number of factors may be keeping some from returning to work. Some are looking for more job opportunities, and some are waiting for the right timing. Others want more Covid security, and some have care responsibilities at home.

“We looked at the states that got rid of it, like Montana did, and compared them to states that kept it and we saw no difference in terms of labor force participation or employment in these states, which suggests that unemployment insurance payments weren’t a big part of this story,” he said.

Ward named other factors behind the challenge of finding employees, including the shrinking of the “effective labor force.” With new opportunities to work from home, some may live in Missoula but work for firms based in other locations.

And more people are self-employed.

“We’ve got concerns that group is growing, and it may be shifting the size of our local labor force,” said Ward. “These are people who used to be part of the local labor pool.” 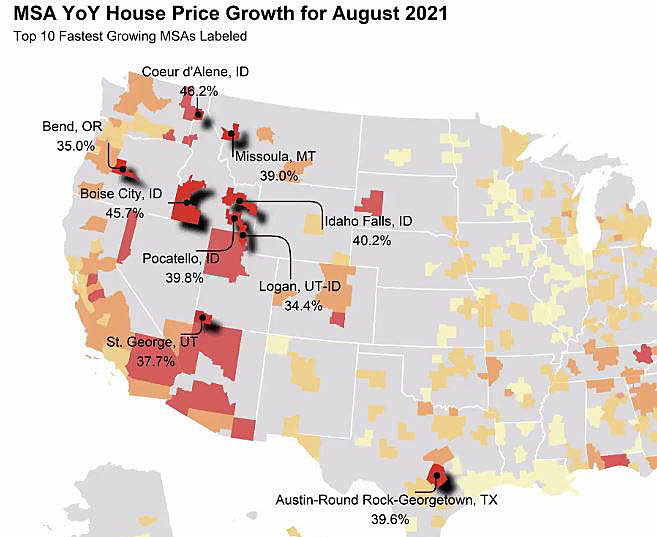 Missoula’s housing crunch is also a factor, and one that plays large in nearly all employment factors. The city traditionally has imported workers to fill jobs, but Ward said some are reluctant to relocate given the high cost of housing. Others may be leaving for the same reason.

“All those things are driven by the housing market, but they’re affecting our local labor market,” he said. “We have some suggested evidence saying these things are real and causing some issues.”

As of August, Missoula stood among the nation’s fastest rising markets for housing prices, and the vacancy rate is minimal. To economists, it comes down to basic supply and demand, which suggests there’s an increase in residents wanting to live in Missoula.

But if the population is growing, why isn’t the labor force growing with it? 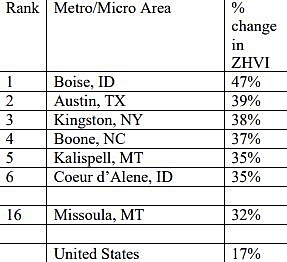 “You combine the surge in housing prices with our stagnant labor force participation, it suggests there’s some squeezing happening in our affected local labor force,” he said. “There’s people living here, that’s why our prices are high, but they’re not participating in the labor force.”

Focusing on the local cost of living may be easier for local government to address than increasing wages, Ward said. One may be a function of policy while the other is driven by market trends.

“We’ve got to figure out what to do on housing supply so we can expand our local labor force by importing workers from elsewhere,” said Ward. “We have to bring local wages in line with the local cost of living. You can try and raise wages and leave costs of living high, or you can try to make sure the cost of living isn’t as high.”