Calling it an opportunity to address Missoula’s housing crisis on a transformational scale, a team of developers on Monday unveiled a proposal to redevelop Larchmont Golf Course with a mix housing, commercial and medical facilities.

A new 18-hole golf course could be built to replace Larchmont on nearby property, along with trails, a new clubhouse and a boat launch on the Bitterroot River. The existing course is used only seasonally and doesn’t serve the highest and best use of the community given its need for housing, the developers contend.

But the Larchmont golfing community on Monday expressed opposition to starting a new course, and county commissioners placed the onus on the developers to win public support for their proposal as it takes shape.

The county will develop a working plan over the coming weeks to help answer a long list of questions. A decision could be at least a year away.

“This is a transformation of the landscape on a generational scale,” said commissioner Josh Slotnick. “There’s no way we can forge ahead with this without doing an extensive and real public process, and give the developers a chance to develop a plan the golfing community would really like, and a chance for the golfing community to get their details in a row as well.”

As proposed, the developers would give the county 157 acres located nearby on Highway 93 in exchange for Larchmont Golf Course. The course sits off Reserve Street in an existing commercial corridor near city services, public transportation, public parks and a medical center.

The proposed new golf course sits in an undeveloped field that can’t be built upon given its location to the floodplain. But it could serve as a recreational attraction, according to WGM Group, which represents the developers.

“We wouldn’t be opening this discussion without having a replacement location to bring to the table for Larchmont,” said Jeff Smith, principal engineer with WGM Group. “This idea at its core is a concept to allow working Missoulians to remain in Missoula and not be displaced by the ever-increasing cost of renting or owning a home in Missoula.” 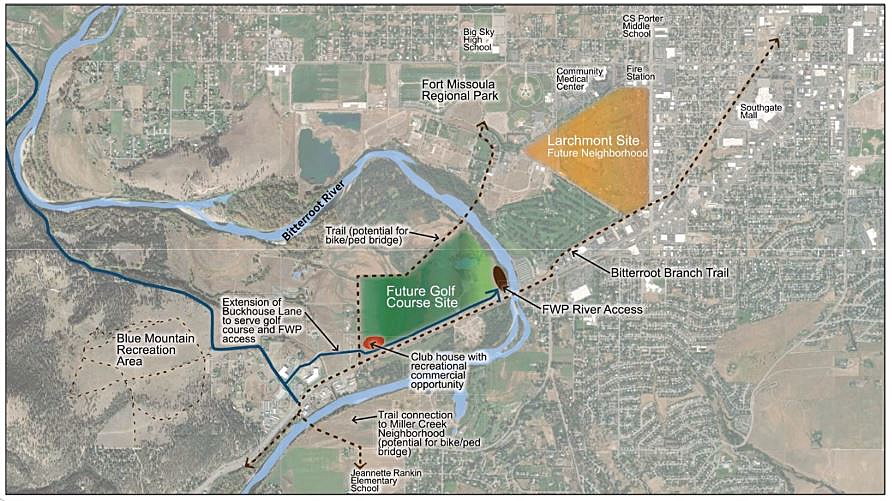 Under the proposal, the developers would transform Larchmont Golf Course into a new neighborhood with a target of 2,000 new homes, new medical offices and commercial opportunities.

Of the 2,000 units of proposed housing, around 800 would be single-family, owner-occupied homes built upon a community land trust to protect affordability. The project would also include 300 to 400 multi-family homes targeting less than 80% of the area median income, as well as 450 senior living homes.

Kate Dinsmore with WGM Group said the project would create enough attainable and affordable housing to begin moving the dial in Missoula. The median price of a home in the city now stands at more than $400,000 a year – a price that far exceeds the reach of local wages.

Many Missoula residents have been priced out of the existing market. Around 25% of home owners are considered cost burdened, along with 50% of renters, meaning more than 30% of their income goes toward housing.

“We all know housing prices are exceeding wages in Missoula,” said Dinsmore. “But the increase in supply with the economies of scale within this development will help flatten price escalation in both single-family and apartment living in the community. We also have an aging population and there’s a need for senior hosing in the community.”

Boosting the city’s housing stock on such a sizable scale, and within the urban boundary near existing services and two major transportation corridors, has housing advocates eager to see the proposal approved.

“Should it move forward at all, it’s going to be a very long process,” said Emily Brock, director of economic and land development for Missoula County. “Larchmont is a treasured public amenity with enormous use. The county will take a measured, thoughtful approach to any idea for developing it. However, this a bold proposal that could add significant housing supply to our market.”

Out of the gate, at least, the board of directors who oversee Larchmont Golf Course have already voted unanimously to oppose the proposal. Several members spoke against the concept on Monday, saying the idea shouldn’t be explored at all.

While there’s a need for housing in Missoula, they said, divesting a public golf course is a bad idea, even if there’s an opportunity to replace it with a new, more modern and efficient course.

“I don’t think replacing it is a viable option because of the work it takes and how long it takes to develop and mature a golf course,” said Bill Galiher, director of golf at Larchmont. “We’ve had people playing there for 40 years waiting for our trees to grow up. Moving to a site that takes another 40 years to develop and grow wouldn’t be fair to the people who have developed this place.”

Commissioner Dave Strohmaier, a former member of the Larchmont board of directors, said he sympathized with the golfing community.

“I fully understand and sympathize with the concerns of the golfing community, and those who have invested time, energy, dollars and much of their lives into this facility,” he said. “I can’t think of a project I’ve been more lukewarm about in recent days. But that’s not to say we shouldn’t continue the public process and get some concrete answers to questions we might have.”

Boosting the city’s housing stock played second fiddle to the concerns of potentially losing the Larchmont course on Monday, which marked the first public hearing on the proposal.

The developers suggested a new course could be professionally designed and include a number of amenities lacking at the existing course. That could include a more sustainable irrigation system, trails for bikes and pedestrians, winter skiing, a boat launch, and a pro shop and restaurant that doubles as a community center in the winter. It could also include golf simulators for the winter season.

“I know you’ve heard negatives from some people who are heavily invested in the Larchmont golf community about the idea of shifting how golf works in Missoula, but there are other golfers who live in Missoula and love golf and are interested in an architecturally significant new golf course,” said one caller identified as Jessie.