A dated building in downtown Missoula will get a face lift and a new facade that hearkens back to the 1930s and an old art dealer that occupied the block before it was destroyed by fire.

Brian and Karen Sippy of Apple Lane LLC, and the owners and developers of the new building that now houses the Radius Gallery, plan to begin the $2.4 million project this year.

Last week, they received $94,000 in assistance from the Missoula Redevelopment Agency to fund deconstruction and make improvements to the public right-of-way in conjunction with the project. The funding is authorized under state law and meets the goals of Missoula’s Downtown Master Plan.

“Of all the efforts made to preserve the historic pharmacy as part of the Mercantile project, we’re going to try to emulate the McKay Art Co. that used to sit on the corner of 120 N Higgins before it burned, and bring it over as a facade enhancement to the 124 property,” said Brian Sippy.

Several buildings have occupied the site at 124 N. Higgins over the last century. In 1936, it housed the Missoula Meat Co. while the McKay Art Co. sat next door at 120 N. Higgins. The new Radius Gallery now occupies the 120 site, and the old meat building will gain the facade of the old art building. 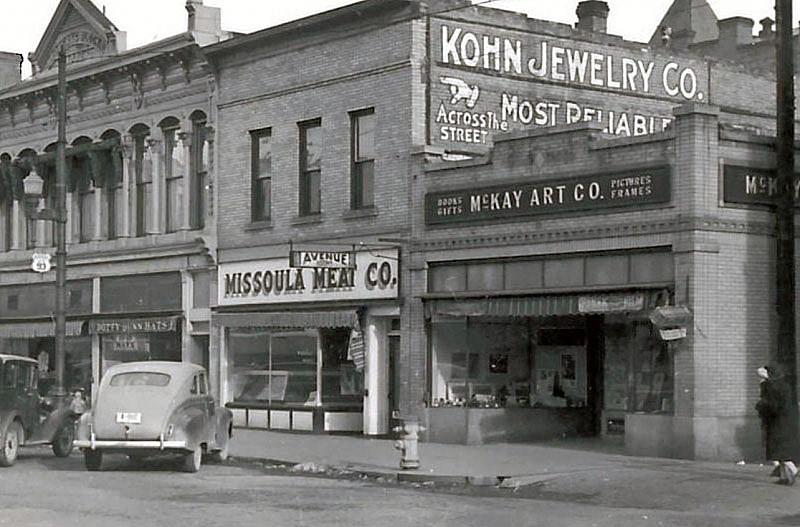 The building at 124 N. Higgins last housed the M Store. However, the lease expired late last year, shortly after the business hit some financial headwinds stemming from the pandemic.

But Apple Lane worked with the business by purchasing the building, which basically infused the M Store with needed cash. When the Griz announced their intention to play football last fall, the M Store was able to extend its lease to the end of the month.

The M Store has now moved to a new location and remains open.

Renovations planned to the 124 property are privately funded and detailed, including the restoration and reuse of old glass plates. That work includes cutting the small glass squares from their leaded zinc frames, cleaning them, treating them with UV light and reframing them in a new zinc frame.

A local glass artist will help complete the work.

In the end, the building will regain the 1930s facade that once greeted visitors to the McKay Co. The work also will increase the property’s tax base by around $6,000 a year and house Relic, an expanding business.

“We’re ready to bring this heritage building back downtown and increase our tax base,” said Brian Sippy. “We’re trying to bring some other arts into there, some textiles or maybe jewelry.”