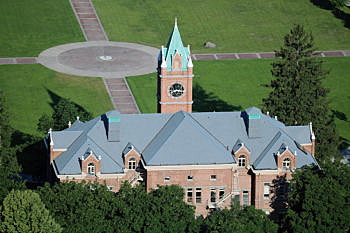 The University of Montana has earned an R1 research status, the top rank for a research institution, UM announced Monday in a news release.

The honor was conferred last week by the Carnegie Classification of Institutions of Higher Education organization, UM said, making the Missoula flagship among just 146 such institutions of 4,000 in the U.S. in that group.

“UM reaching R1 status is a great testament to the quality of our faculty, staff and students,” said Scott Whittenburg, UM vice president for research and creative scholarship, in a statement. “Being one of the top research universities in the country also will help us recruit new students and faculty to campus.”

Carnegie uses a variety of factors to assess campuses, including research spending, staffing levels to support research, and number of doctorates awarded, UM said. The campus noted the ranking will last five years, Carnegie will then reevaluate, and it’s possible to return to R2, a lower ranking.

“Earning R1 validates the impressive research and hard work of many outstanding people at the University of Montana,” UM President Seth Bodnar said in a statement from UM. “This classification puts us in good company among the top research institutions in the world. UM has become many things during its 129-year history, and now we can add to that our status as a nationally and globally known center for research. This should help us attract even more world-class faculty, as well as the undergraduate and graduate students who will learn from them.”

Research spending at UM has soared in recent years from $55 million in fiscal year 2014 to a record $122 million this past year, UM said. Whittenburg said UM is the sixth-fastest growing research university in the nation, known for its work in wildlife biology, forestry, pharmacy, chemistry, climate change and more. In 2020, the vaccine research by UM’s Center for Translational Medicine landed the University on a list titled “Best Universities Solving the Coronavirus Pandemic.”

“One nice feature of the Carnegie designation is that the research dollars and doctorates are not limited to the STEM disciplines,” Whittenburg said. “Research and doctoral completion in the humanities, social sciences and other fields contributed significantly to UM’s attainment of the R1 designation.”

Montana State University in Bozeman also is listed as having “very high research activity” by Carnegie.