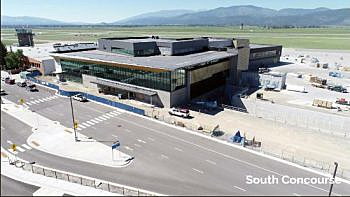 Airport officials closed out contracts with a number of concessionaires this week as they prepare to shift operations into the new terminal.

Among them, two long-time businesses aimed at tourism and real estate will make the transition to the new facility while Faber Coe & Cregg will set up shop at the new bar and restaurant, which will also offer gaming.

The airport will lease its liquor license to Faber, which will include Black Coffee Roasters and KettleHouse Brewing Co. in the south concourse.

“When we first let the concessions to Faber, we didn’t address gaming,” said Lynn Fagan, the airport’s administrative manager. “Jedediah’s let their machines die out and they weren’t providing gaming at the airport.”

Once located in the old terminal, Jedediah’s was replaced by Liquid Planet on a short-term basis. That company did provide gaming, giving the airport a blueprint on how to phrase contracts related to revenue.

“Montana law doesn’t allow gaming revenue to be shared with another party, and airport leases generally are based on sharing revenue with the airport,” said Fagen. “Those two provisions conflict.”

Rather that split gaming revenue, the airport altered the definition of receipts in the concession agreement. It will do the same with Faber as its sets up shop in the new terminal.

The old terminal will be razed as Phase 2 construction begins and Liquid Planet, which took over the Jedediah’s operation, will move out. The airport this week renewed the company’s lease for the coffee kiosk on airport road.

“We shortened their lease term but allowed for an option to renew the coffee kiosk space,” said Fagen. “They own that kiosk, and they’ll lease that for another five years.”

The airport in exchange will receive 11% of the kiosk’s gross revenue.

A similar arrangement was reached with Flathead Travel and John Horton, a broker with Clearwater Montana Properties. Both had operated in the old terminal for years. The two businesses will move into the new terminal on a temporary basis.

“We’re happy they’re going to continue to be in the airport,” said Fagen. “The space in the new terminal is temporary space and won’t exist once the second phase is completed. It’s a month-to-month tenancy.”