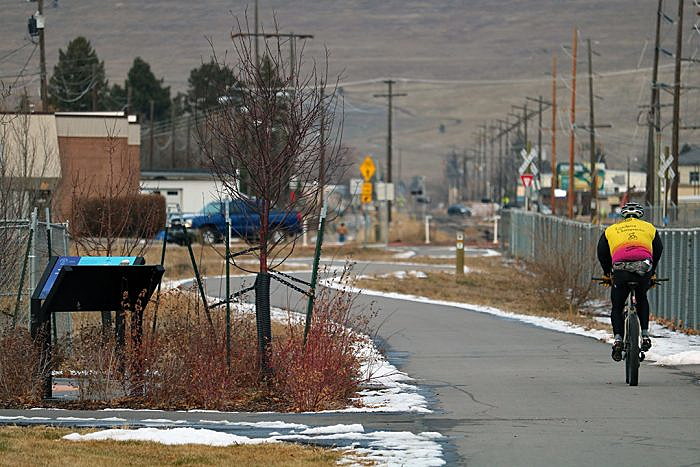 Efforts to improve the safety of bicyclists and pedestrians in a congested Midtown business hub received a funding boost that will calm traffic and make it easier to cross Russell Street once completed.

The $305,000 project will also fill another gap in the city’s effort to construct an east-west greenway extending from the University of Montana to Fort Missoula Regional Park. Such options across Missoula are sparse and have been identified as a priority in the city’s transportation plan.

The Missoula Redevelopment Agency’s board of commissioners authorized funding the project with tax increment from Urban Renewal District III.

“The vision for this greenway is a complete east-west connection from essential Fort Missoula Regional Park and Big Sky High School all the way to the university,” said city transportation planner Aaron Wilson. “It’s what we’d consider a low stress, all ages and abilities travel route.”

As planned, the project will enhance the Kent Avenue crossing at Russell Street with better signage, wider sidewalks and a flashing beacon. A raised crosswalk will be installed on Kent Avenue at Tremper’s shopping center and another near Ruby’s Cafe.

The project will also include a roundabout at the intersection of Kent and Oxford street near the Post Office. Wilson said the project is one of several that must be addressed to complete the east-west connection.

“We know the section between Russell and Brooks was going to be a challenge due to the traffic and the activity that’s happening there,” Wilson said. “That was a potential barrier this project will really address. It’s a huge connection for this neighborhood.”

Wilson said a grant application to convert Brooks Street into a Bus Rapid Transit system includes plans to enhance the greenway crossing there. The city is also seeking funding to enhance the crossing of Bancroft and Higgins Avenue further east.

“These investments are building on each other. They’re not made in isolation,” said Wilson. “We’re thinking about a lot of these transportation improvements and how all the networks connect and how we’re building out complete systems.”

The investments are also born from opportunity, Wilson said. Tremper’s recently completed a redevelopment at the Kent Street shopping center that effectively increased traffic and congestion in the area.

But before that, the area was still congested with a number of key businesses drawing traffic to the area, including Ace Hardware, the Post Office and a grocery store. According to MRA, around 19 accidents occurred in the vicinity between 2015 and 2019.

“Development in this area had brought a lot more activity and has become sort of confusing for bicyclists and pedestrians using this Kent Avenue greenway,” said Annette Marchesseault with MRA. “The city has gotten a lot of requests to fix some safety issues here.”