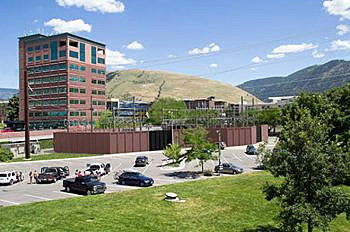 NorthWestern Energy will lease a portion of Caras Park this summer as it begins a $10 million project to increase the capacity and appearance of an electric substation in downtown Missoula.

With growth on the horizon, the project will provide the district with more power and was approved by the City Council on a final 10-1 vote on Monday night.

While the park wasn’t the most ideal location, council members agreed, it was the only option that met the needs of both the utility and the property owner. Its timing with other projects in the area was also beneficial.

“This isn’t necessarily an area we would first choose, but this was found to be the best option available for this project,” said council member Amber Sherrill. “We have a lot of construction going on in that area, including the bridge. We’ll be able to do restoration once the project is done.”

The city had planned to reconstruct much of Caras Park as outlined in the Downtown Master Plan. In a stroke of good timing, the Montana Department of Transportation also opted to renovate the Higgins Avenue bridge at the same time. Together, it helped consolidate the duration of the impacts to the area.

The city has leased portions of the park to MDT during construction and will now do the same for NorthWestern Energy. The utility will also pay to restore the park’s vegetation, including $31,000 for the existing trees and another $105,000 for restoration costs after the substation is completed.

“It’s the city’s role to figure out the best way forward and be reasonable and make this work,” said Ward 3 council member Gwen Jones. “We shouldn’t conflate this with other issues.”

As was the case last week, council member Daniel Carlino, who also represents Ward 3, was the only member to oppose the project.

“With a company like NorthWestern who has a 20-year-plan to make their greenhouse gas emissions go up and build a bunch of pipelines under our rivers in Montana, I have a hard time thinking this is a suitable site and letting them take even more of a public park for another ten months,” he said.

But most council members acknowledged the city’s plans for inward growth and the role the downtown district will play in meeting those goals in the coming years. That will require more power, and the downtown substation is key to providing it.

A number of projects are anticipated for downtown Missoula in the coming months and years, including the redevelopment of the old library block, the former Missoulian property, and seven acres at the Riverfront Triangle.

St. Patrick Hospital has plans to expand its facility and a number of housing projects are slated for construction within the district.

“When we look at what we want downtown to be, we want more growth,” said council member Mike Nugent. “Whether or not individual people have issues with NorthWestern, that’s fine, but this is the right thing to do for the broader picture of Missoula.”