By Chris Prentice NEW YORK (Reuters) - Facebook Inc chief executive Mark Zuckerberg again rejected the idea that the social network affected the U.S. presidential election, saying late Saturday it is "extremely unlikely" news hoaxes changed the outcome. Ensnared in a string of content controversies in recent months, Facebook has insisted that it is a technology company, not a … END_OF_DOCUMENT_TOKEN_TO_BE_REPLACED

By Alister Doyle MARRAKESH, Morocco (Reuters) - U.S. President-elect Donald Trump could use legal short-cuts to pull out of a global agreement for fighting climate change within a year, keeping a campaign promise and by-passing a theoretical four-year wait, lawyers say. Trump, who has called global warming a hoax and said it was invented by the Chinese to undermine U.S. … END_OF_DOCUMENT_TOKEN_TO_BE_REPLACED

By Susan Cornwell and Richard Cowan WASHINGTON (Reuters) - Donald Trump, elected U.S. president on Tuesday, will enjoy Republican majorities in both chambers of Congress when he takes office in January and an early Capitol Hill honeymoon is likely on several issues, but a long-term romance may be more challenging. Under normal circumstances, a president whose party controls … END_OF_DOCUMENT_TOKEN_TO_BE_REPLACED

By Jim Urquhart (Reuters) - Some call them militia. They call themselves patriots. In the United States, many local militias are armed and have taken issue with some government policies. After spending a year with groups in Oregon, Montana, Nevada and Idaho protesting what they describe as government overreach, I've decided not to label them at all. In April 2015, I was … END_OF_DOCUMENT_TOKEN_TO_BE_REPLACED 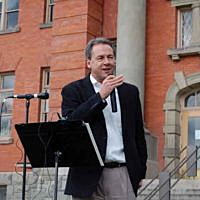 (Reuters) - Republicans and Democrats will battle in a dozen U.S. states that will hold elections for governor on Tuesday, and many of the races could be close calls. NORTH CAROLINA Drawing national attention because of a debate over transgender rights, Republican Governor Pat McCrory is seeking a second term against Roy Cooper, a Democrat who has been the state's attorney … END_OF_DOCUMENT_TOKEN_TO_BE_REPLACED