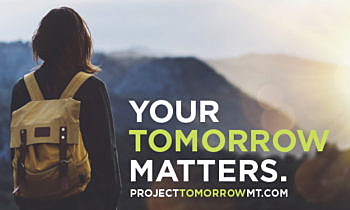 When Kim Seeberger’s 17-year-old daughter completed suicide nine years ago, the distraught mother went looking for help, though it wasn’t easy to come by. Now, she said, times have changed as suicide moves past perceptions of shame and enters the public dialogue.

And that’s just where the experts want it.

Seeberger, who now serves as a prevention volunteer, joined a veteran advocate, a social worker and the United Way of Missoula County on Monday for a panel discussion about suicide and why, for the past 40 years, Montana has outpaced the nation in its rate of self-inflicted deaths.

The event was hosted by City Club Missoula and Project Tomorrow, a statewide suicide prevention campaign.

“In 2008, we lost our 17-year-old daughter, Tiffany, to suicide,” said Seeberger. “I can’t explain the impact that had and will always have on our family. It’s not something that goes away and heals. Many people don’t know how serious this situation is.”

While Seeberger had to find her own way after her daughter’s death, times have since changed, as she and others work to bring an end to what one panelist described as a compulsive act driven by deep isolation and loneliness.

“When my daughter died and I tried to do something, the doors were shut on me so fast I couldn’t even fathom it,” said Seeberger. “But the doors are opening up. I’ve seen amazing progress, with people willing to talk about it and get the information out there to the community.”

For all age groups and for the past 40 years, Montana has ranked in the top five nationally for its rate of suicide. In 2015, it ranked third with 272 completed suicides.

Susan Hay Patrick, chief executive officer with United Way of Missoula County, drove those figures home, saying 36 individuals completed suicide in Missoula County last year. In 2015, 25 completed the act while 36 others did so in 2014.

In all three years, most of the suicides were men around the ages of 45.

“Many of you have heard me say that if any other single cause of death was tragically, inexplicably, claiming the lives of 115 family members, friends and colleagues over a three-year period, we’d declare it a public health crisis and stop at nothing until we found a cure,” Patrick said. “We need to bring that same level of passion and determination to the issue of suicide.”

As it stands, suicide is currently the 10th leading cause of death in the U.S. Nearly 90 percent of those who complete suicide struggle with at least one major disorder, with mood disorders leading the way. Substance abuse runs close behind.

With the decision to attempt suicide taking some as little as five minutes to make, removing the means is paramount to reducing the number of completed deaths, Patrick said.

“Owning a gun is part of our culture in Montana,” Patrick said. “We’re not telling them to not have guns. We’re asking them to lock up those guns, to keep them safe, especially if someone in the home is depressed and at risk of suicide. Our rugged, cowboy mentality in Montana does not serve us well in this area.”

For every person who completes suicide, Matt Taylor, founder of ClearLight Consulting, said 25 others have attempted it. Statistically speaking, that equates to roughly 1 million Americans each year.

It is, Taylor said, a public health crisis that affects everyone.

“All of us in this room have been touched in one way or another by the issue of suicide,” Taylor said. “Whether we’re willing to talk publicly about it right now or not, most of us know somebody that has died by suicide, or we may be part of a community group that has experienced a loss by suicide, or know someone who has attempted.”

Despite the impacts suicide has on survivors, Taylor said society has been slow to talk openly about the issue. Prevention and intervention can be lifesavers, he said, if the topic is brought into the light.

“This really is an issue that ripples through all aspects of society, yet we’re only just now becoming a little bit more comfortable talking about it,” Taylor said. “My personal mission is to help break open those doors. Let’s get it out there in the open.”

While Taylor noted that no two cases are quite the same, suicidal thoughts may come and go, or compound over a short period of time. Once an individual makes the decision to kill themselves, 70 percent will do so within the hour.

As many as 48 percent attempt suicide within 20 minutes while 24 percent do it in less than five minutes, he added.

“Suicide is often a very, very impulsive act,” Taylor said. “We can educate the public about how drugs and alcohol increase impulsivity, and in times of crises, we should be trying to get those things out of the house if possible.”

Anton Johnson, co-director of Extreme Sports at the VA Center, said contemplating suicide or struggling with mental illness in the veteran population has been stigmatized for years as it’s seen as mental weakness.

Now, he said, efforts by the VA and local efforts, including Project Tomorrow, are looking to end that sigma. Tackling suicide head on, he said, has become the preferred approach. It doesn’t hurt to ask the question.

“If you ask that question, you’re going to decrease the likelihood that it might happen and open up the opportunity for that person to reach out for help,” said Johnson. “We want you to ask the question.”