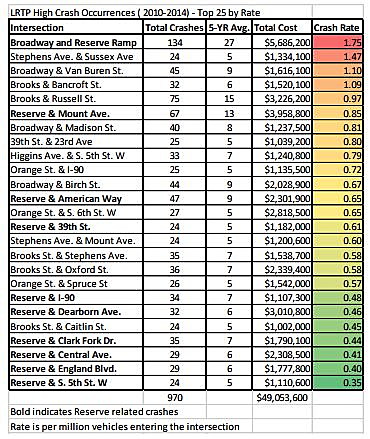 The greater Missoula area has seen a reduction in the number fatal accidents and incapacitating injuries over the past few years, though the number of crashes is on the rise, transportation officials said this week.

The figures, included in the Community Transportation Safety Plan, were released in a progress report Thursday to the Transportation Technical Advisory Committee during its monthly meeting.

The report is required annually to show trends and accomplishments in safety measures over the prior year.

Dave Gray, the transportation planner for the Metropolitan Planning Organization, said the Missoula urban area is on pace to achieve its goal of a 25-percent reduction in the five-year average for both fatal and incapacitating crashes.

“Our short-term goal is a 25-percent drop from 2007 to 2011 in the five-year average,” said Gray. “What that means is a reduction in fatalities from eight down to six, and incapacitating injuries down from 143 to 107. I’m glad to say we’ve completely hit that short-term goal.”

The rolling five-year average for fatalities dropped from eight in 2011 to five in 2015 while the number of incapacitating crashes dropped to 78 in 2015.

“The crashes are continuing to increase, and that’s due to non-incapacitating crashes and safety in vehicles and things like that,” said Gray. “That’s where the long-range plan comes in and the detailed work where we can address intersections and see if we can figure out what’s going wrong there.”

As part of its progress report, the MPO also must analyze and report where crashes took place, including the city’s intersections.

According to the data, from 2010 to 2014, the ramp at West Broadway and Reserve Street has seen the highest crash rate at 1.75. That’s followed by the intersection of Stephens and Sussex avenues at 1.47.

Broadway and Van Buren, Brooks and Bancroft, and Brooks and Russell rounded out the top five intersections with the highest crash rate in Missoula. All told, crashes at the 25 intersections topping the list carried a total cost of more than $49 million.

Gray said the results will help determine which new safety projects will be included in the next Long Range Transportation Plan.

“We’re using that to determine the priorities in the long-range plan,” said Gray. “It’s also what we’re going to need to use for the federal performance measures.”