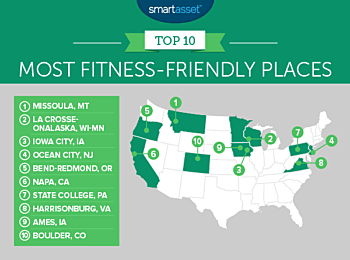 Feeling a little soft and on the heavy side? If you live in Missoula, you’re in the right place, so long as your plans for 2018 come with an eye on fitness.

Missoula ranked No. 1 in SmartAsset’s most “fitness friendly” places for the third consecutive year – a nod to the city’s walkable design, its array of healthy eating choices and its abundance of workout options, be it the gym or a hike up Mount Sentinel.

Unlike cities in the South, where “metros tend to be riddled with fast food places and residents have to drive everywhere,” the cities on this year’s fitness friendly list offer something more, and most of them come with commuting options that don’t include a car.

That’s a nod to urban planning and community vision.

To determine the most fitness friendly places in the U.S., SmartAsset – a personal financial company – looked at data for 340 cities. It included metrics such as the percent of people walking or biking to work, the number of fitness jobs in the area, the number of fitness establishments and the prevalence of fast food restaurants.

According to the study, Missoula has 123 fitness centers per 10,000 businesses.

“Sometimes all it takes to get in shape is a simple change of habit,” SmartAsset said of the Garden City. “For example, by skipping the car and walking or biking to work, you can adopt a healthier lifestyle. Missoula ranks highly because it allows its residents to do just that. Around one in 11 residents walk or bike to work here, a top 10 rate.”

“(Bend) has a large number of fitness professionals and fitness establishments, so whatever your fitness needs you should find someone here who can help,” the study found, adding that the cost of fitness in Bend was high. “Additionally, only 4 percent of commuters in Bend walk or bike to work, which is the worst score in the top 10.”

Boulder, Colorado dropped from eight to 10th place on this year’s ranking. While it scored high on those who bike or walk to work, its affordability of fitness help was among the worst in the country.

“Missoula has 36 fitness professionals per 10,000 workers and 137 fitness centers per 10,000 businesses,” the study suggested last year. “In fact, Missoula has the highest concentration of fitness businesses in the country, so residents don’t need to go far to find a recreation or fitness center. All things considered, it’s not surprising that we’ve also highlighted Missoula as a top city for an active retirement.”