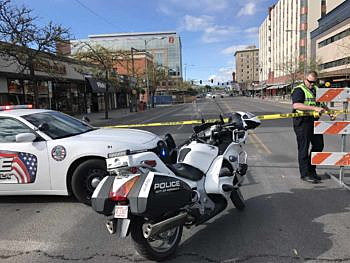 The city of Missoula will receive $1 million in tax increment monies from the Missoula Redevelopment Agency to help pay debt on the purchase and renovation of a new building that will house detectives with the police department and hold evidence in storage.

The new facility, located at 101 N. Catlin Street, carries a total cost of $4.2 million. With $1 million coming from MRA in the form of tax increments, the city will issue bonds totaling $3.2 million to cover the rest.

While amortization on the city’s bonds will likely run 25 years, Ellen Buchanan, director of MRA, said her agency will likely pay off its $1 million contribution in a shorter period of time.

Growth in the district has picked up pace in recent years, thanks in part to the city’s investment in infrastructure in the Old Sawmill District, including the construction of Wyoming Street.

“There’s revenue coming in from those investments,” she said. “There’s no reason to think this won’t continue to grow as we continue to see additional investment in that district. And with Russell Street coming online, I think you’re going to see more investment along Russell as well.”

Last year, Mayor John Engen and city CAO Dale Bickell received approval from MRA to purchase and renovate the vacant building on Catlin Street and seek reimbursement down the road.

The Missoula Police Department has been seeking a larger facility to safely hold evidence in storage. The new facility will accommodate that need while enabling the department to consolidate office space.

The building will also include a briefing room for patrol officers and enable the police department to relocate its detectives, who are currently housed in a small office on Pine Street.

“Hopefully by the end of the month we’ll be ready to move in,” said Scott Hoffman, the department’s assistant chief. “We’re looking forward to it.”

By relocating detectives from the downtown office, the vacant space will enable the city to join MRA with the newly created Office of Housing and Community Development. The two are working in tandem on a housing policy and other housing strategies.

Bickell said two offices will be connected under a single roof, and MRA’s tight conference room will be expanded as part of the shuffle. The city currently leases the Pine Street office, though it may look to purchase it in the years ahead.

“One of the things we were talking about is moving the housing office in there,” said Bickell. “We already have permission to connect the buildings here. We can connect the departments well together – MRA and housing at the same time.”

The Missoula Police Department has said that placing a police facility on Catlin Street would also serve as an advantage to the neighborhoods south of the Clark Fork River by establishing greater police presence.