Montana Rep.-elect Greg Gianforte issued a written apology late Wednesday to the journalist he stands charged with assaulting, and agreed to donate $50,000 to a group that protects press freedom and the rights of reporters worldwide.

The apology and donation are part of an agreement that settles any potential civil lawsuits arising from the election eve incident, during which Gianforte body slammed Ben Jacobs, a reporter for the Guardian who asked him about the Republican health insurance plan.

It does not have any effect on the misdemeanor assault charge the newly elected congressman faces in Gallatin County Justice Court. By virtue of a delay granted Wednesday, Gianforte has until June 20 to answer that charge.

If found guilty, misdemeanor assault carries a potential $500 fine or up to six months in jail.

In his letter to Jacobs, published in the Guardian, Gianforte said: “My physical response to your legitimate question was unprofessional, unacceptable, and unlawful. As both a candidate for office and a public official, I should be held to a high standard in my interactions with the press and the public. My treatment of you did not meet that standard.”

“I made a mistake and humbly ask for your forgiveness,” he wrote.

Gianforte said the $50,000 donation to the Committee to Protect Journalists was made “in the hope that perhaps some good can come of these events.”

Immediately after the May 24 attack, Gianforte’s campaign put the blame on Jacobs, saying the reporter “aggressively shoved a recorder in Greg’s face.”

Jacobs, however, had recorded the entire incident, and that audio showed his question to be quietly delivered in a straightforward manner, after which Gianforte exploded in anger.

“Gianforte grabbed Jacobs by the neck with both hands and slammed him into the ground behind him,” wrote Fox News reporter Alicia Alcuna. “Faith, Keith and I watched in disbelief as Gianforte then began punching the reporter.”

Despite being cited that night by the Gallatin County sheriff, Gianforte won the May 25 special election with 50 percent of the vote, to 44 percent for Democrat Rob Quist.

In his letter Wednesday, Gianforte admitted that the attack was his fault. 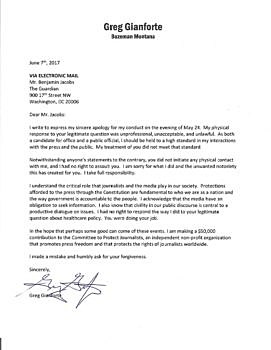 “Notwithstanding anyone’s statements to the contrary, you did not initiate any physical contact with me and I had no right to assault you,” he wrote. “I am sorry for what I did and the unwanted notoriety this has created for you. I take full responsibility.”

He added: “As both a candidate for office and a public official, I should be held to a high standard in my interactions with the press and the public. My treatment of you did not meet that standard.”

Finally, Gianforte said he understands “the critical role that journalists and the media play in our society. Protections afforded to the press through the Constitution are fundamental to who we are as a nation and the way government is accountable to the people. I acknowledge that the media have an obligation to seek information.

“I also know that civility in our public discourse is central to a productive dialogue on issues.”

In addition, the groups asked President Trump to denounce the incident, which they believe was inspired by his anti-press rhetoric on the campaign trail and in the months since the inauguration.

The Society of Professional Journalists, PEN America, Free Press and Reporters Without Borders submitted joint letters to the president and the House Committee on Ethics. In addition, the groups filed a formal complaint with the Office of Congressional Ethics, an independent agency within Congress that accepts ethics complaints from the public and refers them to the House Committee on Ethics for investigation and a disciplinary recommendation to the full House.