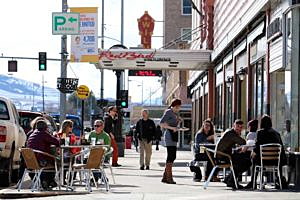 How much does poor lighting stand as a barrier for walking in Missoula? Do speeding motorists in residential areas hamper your pedestrian travels? Is it too hard to cross busy streets?

Those questions and others are posed to Missoula residents in a survey launched Tuesday by the Metropolitan Planning Organization as it looks to identify priorities in its Pedestrian Facilities Master Plan.

Once completed, the plan could inform future policy decisions by the City Council.

“We want to come up with options on how to prioritize sidewalk infrastructure,” said Jessica Morriss, the city’s transportation planning manager. “We want to figure out ways to fund improvements, maintain existing infrastructure and build new infrastructure, and hopefully do it in a faster and more efficient way.”

Over the past few months, sidewalks have emerged as a surprisingly contentious issue among members of the Missoula City Council.

Back in April, the council moved to create a sidewalk master plan after some questioned why certain areas, including the Slant Street neighborhood, were seeing older sidewalks replaced with new ones while other neighborhoods had no sidewalks at all.

The Slant Street project suggested inequity in the way the current system is carried out, leading several council members to push for a new approach. Pedestrian traffic would increase if a more equitable approach to foot traffic were created, they argued.

“There are a lot of areas of the city that don’t have any sidewalk infrastructure,” said Morriss. “We’re not getting to those areas with the current funding we have. If we want to try to do that and provide resources in those areas, we may need to find better ways to prioritize.”

As a start, the city tapped several dozen volunteers to scout the condition of the city’s sidewalks, as well as curb ramps and whether they meet the standards of the Americans with Disabilities Act.

The study was launched in July and is expected to take about a year to complete.

“We developed a GIS tool and recruited volunteers to actively go out and about across the city to help collect data on sidewalks and curb ramps,” said Morriss. “We put together a 10-point reading scale for folks to look at sidewalks and put into this app we developed on a condition scale of 1-10.”

Morriss said the results will help create an accurate city map that reflects conditions and gaps in the system. That, in turn, will be the subject of a policy debate that looks at pedestrian priorities and funding sources.

As it stands, Morriss said, sidewalks are built in a number of ways. The Missoula Redevelopment Agency maintains a sidewalk program for the urban renewal districts it oversees, and developers must meet certain infrastructure improvements when new projects come online.

The city also has a subsidy program that helps property owners cover the cost of replacing or repairing a sidewalk. The City Council increased the subsidy in June from $15,000 to $20,000. Occasional grants also help cover some costs.

“There will be policy decisions involved around prioritizing and funding, whether to keep it the way it is or change it,” said Morriss. “There’s a lot of different options to be considered. We’re laying the groundwork for what’s out there and what the gaps are.”

The study goes beyond neighborhood sidewalks and also looks at pedestrian infrastructure as a whole, including access to parks and trails, bus stops, and crossing busy streets to access shopping and public schools.

“Another part of what we’re doing is collecting whether there are curbs and gutters in locations, and boulevards and trees,” said Morriss. “It all relates to sidewalk infrastructure, and it’ll be used to figure out how to prioritize and fund.”