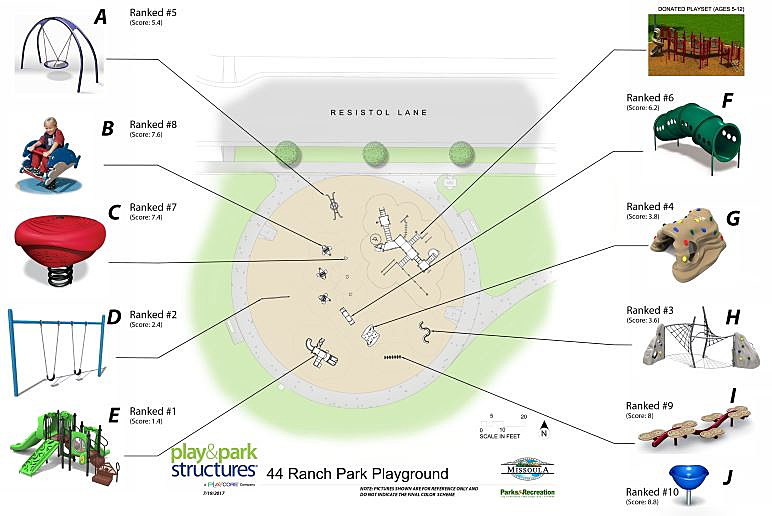 Neighbors in the 44 Ranch subdivision are going door to door – at City Hall and in the burgeoning development off Mullan Road – to find the funding and equipment needed to build a playground for their children.

Along the way, they’re winning the praises of Missoula City Council members and city staff members for their positivity and can-do approach.

The project began simply enough, with moms and dads talking while their young children ran through the grass and along the sidewalks of 44 Ranch Park.

“Wouldn’t it be great if they had playground equipment to play on?” someone would eventually ask. “How can we make that happen?”

Despite having 180 homes in the subdivision and about a dozen more under construction this summer, 44 Ranch has no playground within a safe walking distance.

The nearest fully equipped parks or play areas are at Hellgate Elementary School and in the Pleasant View neighborhood, both of which require children to walk along busy Mullan Road and Flynn Lane – for more than a mile.

Last spring, Lianna Waller and Sienna Clayborn began knocking on doors in the neighborhood, talking with neighbors about their concerns – and their plan to build a playground in the spacious park provided by developer Kory Mytty.

Already, the park has sidewalks, a small pond and waterfall, a picnic shelter and a large grassy area used by lacrosse and soccer teams for practice.

It also has a very large sand pit designed as a foundation for an eventual playground.

Now we need playground equipment, the women told their neighbors, who are split about evenly between retirees and young families. Soon, they had pages filled with signatures on a letter to their City Council representatives, Jordan Hess and Ruth Ann Swaney.

The reception was warm from both council members, who shared the letter with their colleagues and hailed the group’s work at a recent Monday night meeting.

“Our neighborhood is rapidly growing, and an increasingly large number of young families are moving into the area,” the letter said. “Having a playground in our neighborhood park would help fulfill our active-minded community’s goal of having a park within walking distance for every child.”

Waller and Clayborn see another benefit as well.

“Our neighborhood will love this park, but we think other neighborhoods will love it too,” Clayborn said. “We would love to see people from other parts of Missoula coming out to 44 Ranch to play in our park, and to meet the folks who live here.”

In meetings with Parks and Recreation director Donna Gaukler, she was able to apply for and secure the first piece of equipment, a large play structure for older children donated by Spectrum Aquatics in memory of a former employee.

That equipment, which includes large climbing and slide features for 6- to 12-year-olds, will be installed in September.

But younger children – the bulk of those now in the neighborhood – are too small to use the donated structure, so Clayborn and Waller are trying to raise $44,000 for playground pieces (and another $21,000 for installation) to fill the rest of the sandpit and give toddlers, preschoolers and young elementary students the outdoor equipment they need to enjoy the park.

Mytty has pledged to provide a 50 percent or 100 percent match for the private donations. Neighborhood resident and real estate agent Brint Wahlberg is trying to secure grant money. Waller has $4,000 in pledges from neighbors. Clayborn is exploring other grant opportunities.

They also hope for some funding through the city Parks budget.

“We are so grateful for that donated piece from Spectrum Aquatics,” said Clayborn. “It is such an honor to be chosen for that. And without that equipment, we would be starting out from zero.”

“We would love to get the support of other neighborhoods, too,” she said. “If people would come and check out our park, I think they’d really support what we’re trying to do. We have a great picnic shelter and lots of teams use the grassy area for a practice field.”

Donations for the 10 remaining playground pieces can be made directly to Missoula Parks and Recreation as a tax-deductible contribution, Clayborn said.

For more information on the project or how to help, email captmullan@missoula-neighborhoods.org.