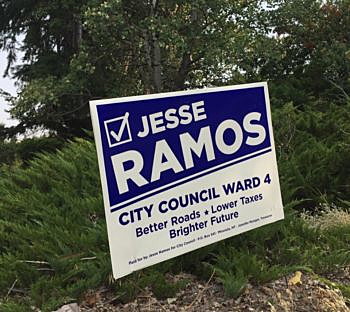 A Missoula City Council candidate and a local attorney have decried the council’s prohibition on electioneering at council meetings as an illegal violation of politicians’ First Amendment rights.

During his allotted 3 minutes of testimony Monday night, Ward 4 candidate Jesse Ramos said it is “frankly insulting” but also unconstitutional to be told he cannot identify himself as a candidate as part of his public comments.

“These 3 minutes are not public time, as I am not a public employee or elected official,” Ramos said. “This time belongs to me under the rights allowed to me by the city of Missoula and the U.S Constitution to engage in city government.”

Nevertheless, Ramos said he intends to “table my constitutional right to announce myself as a candidate simply to avoid a battle that ultimately detracts from the issues I discuss.”

For the past two Mondays, he has identified himself as a “citizen of Missoula,” rather than as a candidate for the Ward 4 seat now held by longtime incumbent Jon Wilkins, who is seeking re-election.

“I do not believe that I should have to do this,” Ramos said. “I like many Missoulians am very uncomfortable with the position I have been put in, having to table a constitutional right for fear of being silenced and thus surrendering my positions on issues I am most passionate about.

“I am not being dramatic, I am merely a defender of my constitutional right to free speech.”

Previously, Ramos identified himself as a candidate prior to making comments during council meetings. Then and now, he posts Missoula Community Access Television recordings of his City Council commentaries on his campaign Facebook page, utilizing them to promote his candidacy.

Two weeks ago, City Council president Marilyn Marler, who is not seeking re-election, announced near the end of the meeting that she was going to find the legal citation supporting the council’s ban on electioneering during meetings – and then would enforce the prohibition.

City attorney Jim Nugent provided that explanation during the week that followed.

In an email to Missoula Current, Nugent said the city of Missoula interprets subsection 2-2-121(3) of Montana Code Annotated as applying to all city officers, elected officials, employees and candidates for municipal office “as a matter of equal treatment pursuant to law.”

The subsection prohibits the use of “public time, facilities, equipment, supplies, personnel or funds to solicit support for or opposition to any political committee, the nomination or election of any person to public office, or the passage of a ballot issue.”

In an email to Ramos, Marler explained the state statute this way:

“When you identify yourself as a candidate for office, and later post the videos of your testimony on your campaign Facebook page, it is clearly campaigning. People are also not allowed to pass out campaign materials at a council meeting (I’m not saying you do this). There are candidate forums for that purpose.”

Again, Marler encouraged Ramos “to continue attending and speaking up,” but warned that “it is a very gray area if you do it as part of your campaign. As the council president, I am going to continue speaking up about this on Monday nights, just so everyone knows the rules.”

Last Monday, Ramos identified himself only as a “Missoula citizen” and did not mention the prohibition on electioneering or his displeasure with Marler’s announcement or Nugent’s explanation.

In the meantime, he consulted with Missoula attorney Quentin Rhoades.

In a four-page letter to Missoula Current, Rhoades said the public-comment opportunity given Missoula residents each Monday night “is neither ‘public time’ not a ‘public resource.’ ”

“That right is of constitutional dimension and it belongs to him (Ramos), individually,” Rhoades wrote. “The right to participate by speaking for three minutes is the private right of the individual citizen.”

Rhoades said the city of Missoula has no authority under which “to justify its limitation on Mr. Ramos’ free speech on grounds it violates Montana election law. If the council so believes, its one and only recourse would be to report the conduct to the Commissioner of Political Practices.”

Only the commissioner can enforce state election laws, said Rhoades, who on Tuesday clarified that he is not representing Ramos but wrote the letter as a private citizen.

City Council members did not respond to Ramos’ criticisms on Monday night, but remain firm in their prohibition on politicking during public comment.

In an earlier interview, Marler emphasized that the rule is not a new one and has long been utilized at council meetings.

Ramos also identified himself as a “Missoula citizen” later in Monday’s meeting, when he commented on the council’s find vote amending the city’s fiscal year 2018 budget resolution.

The amendment was needed because of a clerical error that left the resolution’s final budget figures off by $25 million. The change does not affect taxes or even the expenditures already agreed to by council members.

Still, Ramos scolded council members about the amendment, as he did the week prior.

He also contended the city was living beyond its means because the fiscal year 2018 budget is 33 percent higher than the 2017 budget, by Ramos’ accounting. He wondered out loud how the city would find that extra money, despite council members’ repeated assurances that city taxes are not increasing in the year ahead.

The budget difference is the result of the city’s purchase and operation of Mountain Water Co. – now called Missoula Water – as the local provider of drinking water.

Missoula Water operates as its own entity, but its numbers are added into the city’s final budget resolution.