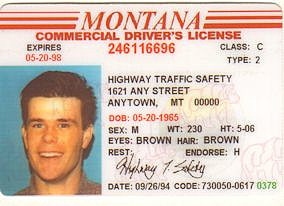 A national civil rights group based in Washington, D.C., on Friday filed a class-action lawsuit against the state of Montana for suspending the licenses of people who have safe driving records but are otherwise too poor to pay their traffic tickets or court costs.

Equal Justice Under Law filed its suit in Butte District Court, saying that the state’s wealth-based driver’s license suspension scheme traps the poorest residents in a cycle of poverty.

“The Motor Vehicle Division automatically and indefinitely suspends the driver’s licenses of people who owe court-ordered fines, costs and restitution, even if they simply cannot afford to pay,” the suit contends. “Without a driver’s license, people already facing the harsh realities of owing court debt while living in poverty face additional hurdles of being unable to drive to and from work, get their children to daycare, keep medical appointments, and care for their family members.”

Equal Justice Under Law is focusing on Michael DiFrancesco, a 22-year-old Montana resident, to make its case. DiFrancesco was fined $185 for a civil infraction he committed when he was 14 years old and ordered to pay for and complete a substance abuse course.

At the time, the suit contends, he could not afford to pay the fine or the fee for the course. He received notice in 2009 that his driver’s license had been suspended as a result. To get it back, he would have to pay all his court debts, plus an additional $100.

DiFrancesco works in the construction field but has since lost his job because he lacks a valid license, according to the suit. It says he also has become homeless and has been convicted of driving without a license five times in the past three years, further driving up his debt to the court to the tune of $4,000.

“Especially in a state like Montana with few public transportation options, losing a license is devastating,” said Phil Telfeyan, the lead attorney and executive director of Equal Justice Under Law.

“Unable to drive, people often lose their jobs or have a hard time finding employment, making it even more unlikely that they will be able to pay their debts to the state. This system traps people who are poor in an impossible cycle of poverty, and it needs to end.”

According to the group, Montana suspends the licenses of roughly 10,000 drivers every year because they cannot pay court debts. The lawsuit contends the scheme is not only unfair, but violates the Constitution.