Saying fire conditions will remain challenging for the rest of the week, Gov. Steve Bullock on Monday said the state will continue to apply available resources to battle Montana’s wildfires.

A number of new evacuations went into effect on Monday and air quality in several western Montana communities, including Missoula and Seeley Lake, was listed as “very unhealthy.”

A red flag warning was also posted Monday into Tuesday, promising another difficult day on the fire line. As many as 43 fires were listed as active in Montana on Monday afternoon, including 11 on the Lolo National Forest.

“We are facing a very challenging and unprecedented fire season in Montana and throughout the West,” Bullock said. “The reality is, Montana is in a severe drought and the conditions are ripe for continued severe fires throughout September.”

Bullock said local, state and federal partners are working to combat regional fires and to ensure that all available resources are made available.

But while state officials also work with the Federal Emergency Management Association, looking for help to cover state and local firefighting costs and to help businesses and people affected by fires, no such help has been announced.

“This has been a long and incredibly difficult fire season and conditions this week will continue to be challenging,” Bullock said. “Everyone – residents, visitors and volunteers – must continue to stay safe, stay informed and continue to support our firefighters, our communities and businesses impacted by fires.”

The state’s fire situation has been front and center for nearly two months now, drawing both the U.S. Secretaries of Interior and Agriculture to Missoula, as well as the state’s congressional delegation. The governor initially declared a drought emergency on June 23, followed by a drought disaster on July 19.

Bullock followed by declaring a fire emergency on July 24 and a fire disaster just last week. The latest declaration allows the governor to mobilize additional state resources, as well as the Montana National Guard to combat fires. 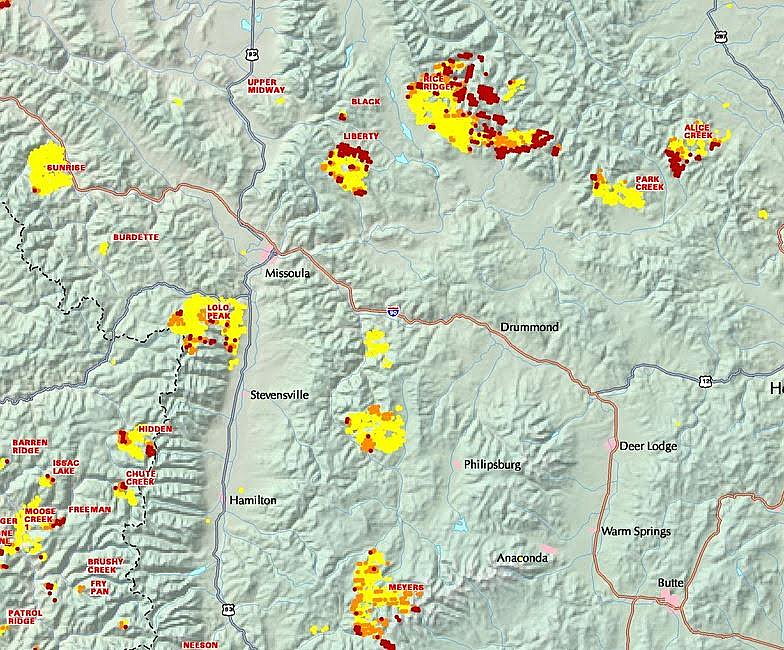 On Monday, air quality was “very unhealthy” in Missoula, Frenchtown, Seeley Lake and Rainy Lake, according to the Missoula City-County Health Department.

When air quality is very unhealthy, people with heart or lung disease, smokers, children and the elderly should avoid heavy or prolonged exertion and stay indoors when possible. People with asthma should follow their asthma management plan.

Everyone else should limit prolonged exertion and limit time spent outdoors.

Several western Montana fires grew on Sunday and were expected to add additional growth on Monday, as winds shifted from the east and a red-flag warning went into effect.

“The east winds today could totally change the fire expansion patterns and directions we have seen the last couple of days,” said Ben Schmidt, an air quality specialist with Missoula County.