Missoula’s candidates for mayor revealed more about their platforms and goals for the office this week, and identified those working behind the scenes to help them win the highest job in municipal government.

At separate forums on Tuesday, Mayor John Engen and challenger Lisa Triepke rehashed many of the issues that have set them apart throughout the campaign, from building infrastructure to pursing the city’s Zero Waste initiative.

Engen, who is seeking his fourth term in office, wants to address housing and continue what he describes as the city’s economic growth. Triepke, who bills herself as a political newcomer, has based her campaign on cutting taxes and maintaining basic services.

“This race isn’t about me – it’s about all of us here in Missoula trying to make it a better place,” Triepke told members of the Missoula Downtown Association. “I’ve got a fantastic team that’s helping me, and I think that’s one of the things that’s probably my biggest strong suits. I’m good at surrounding myself with people who are excellent in their field and can make smart, good decisions for the best of all.”

Triepke has routinely referred to “we” and “my team” throughout her campaign, and on Tuesday night at a forum hosted by Missoula Rises, she reiterated her team approach to the job as mayor.

“This job isn’t about me,” she said. “It’s about surrounding myself with quality people who can help lead and (make) team decisions. I think that’s my biggest quality, is to surround myself with strong-minded people.”

So who are the people behind Engen and Triepke’s run for office? And would those team members have a job in either candidate’s administration if elected as mayor?

Engen said his campaign is a blend of paid individuals, including Melanie Brock of Brock Consulting and University of Montana political science major Mackenzie Lombardi. It also includes several interns and volunteers.

None of them, Engen said, would have a job in his administration if he’s reelected to office.

“This isn’t the White House and that’s not the way the world works,” he said. “We have employees who have rights. Fortunately, over time, we’ve been able to assemble what I think is a pretty terrific team working for the city of Missoula. Those folks would continue to do the terrific job they’re doing today.” 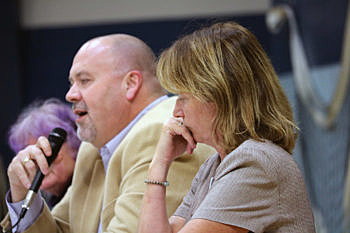 Triepke described her campaign as a grassroots effort that “kind of came out of nowhere with people that stepped up and believed in the need for change.”

Beck considered running as mayor but doesn’t live in the city limits.

“We’ve had no discussions, period, about any roles or anything past the election,” Triepke said. “We’re so focused on winning the election and making progress there. Anything that comes after that starts getting focused on after Nov. 8.”

At Tuesday night’s forum hosted by Missoula Rises, members encouraged the candidates to “talk beyond soundbites” on a range of issues, including the city’s Zero Waste initiative, local development, infrastructure and city spending.

Triepke said that while she has not yet determined what she would cut from the budget, she maintained her stance that the city is overspending on a number of fronts. She suggested the roughly $54,000 earmarked for a bike-pedestrian coordinator could be better spent on other programs, and that the city spends too much on studies.

She also presented other cost-saving options.

Engen questioned Triepke’s argument, saying he was not aware of an actual comparative analysis between cities on the number of employees driving city vehicles. Over the past five years, he said, the city of Missoula stopped allowing employees to take cars home.

“Most of what we spend money on is human beings that do the work that citizens expect and deserve every day,” Engen said. “That’s where we spend most of our money and that’s where we should appropriately be spending most of our money. I’ll continue to be committed to ensure that we have folks on the ground to continue the work that needs to be done.”