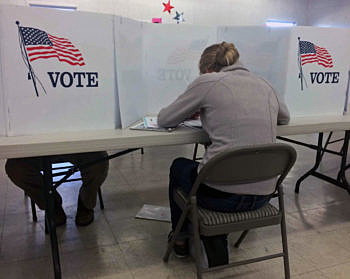 Three years ago, Missoula County placed the job of running elections in the hands of an appointed official, a move that most agree has worked out well by removing the post from partisan politics and allowing it to focus on the needs of voters.

But whether the job should remain that of an appointed official or if voters should elect someone to conduct the work remains unsettled, and the pros and cons of both sides proved equally compelling as they were presented recently to Missoula County commissioners.

“As an appointed election administrator, I can operate freely in the best interest of the voters of Missoula County,” said Rebecca Connors, who currently serves as the county’s appointed elections administrator. “I can make decisions that are free from partisan politics because I look solely through a customer-service lens.”

Commissioners appointed Connors to the position in 2014 and worked from the onset to reduce the cumbersome wait times experienced by voters during the 2012 general election. She opened more satellite offices, improved voter relations and cut wait times to less than 20 minutes.

Serving in an appointed capacity, she believes, has insulated her from political interference. She reports directly to the county’s chief administrative officer who in turn reports to the Board of County Commissioners, with each of its members being elected officials.

Connors believes the arrangement buffers her from political issues and has eliminated the extra burden of running for office, as was the case when the job of running elections was left to the clerk and recorder, who is elected by voters.

“There are significant differences in reporting to an elected official and being an elected official,” Connors said. “When there’s political attachment to the elections office, it can be seen as the fox guarding the hen house. My decisions aren’t made on the premise of reelection. They’re made in the interest of voters.”

Tyler Gernant, who serves as the county’s clerk and treasurer – an elected position – said Connors has performed well as the county’s appointed elections administrator for each of the past three years. However, he disagreed that the office is viewed by the public as nonpartisan.

In making his case, Gernant noted that Connors was appointed by three elected commissioners, each one being a Democrat. He added that Connors is also from Missoula County, which leans heavily to the left. Such facts make the appointed position a partisan one despite its efforts to remain neutral, he said.

But in a reverse of thought, Gernant said that’s not necessarily a bad thing. He pointed to Secretary of State Cory Stapleton’s recent accusations over voter fraud. Stapleton, who was never able to prove his allegations and eventually let the issue drop, disparaged both Democratic and Republican election officials for nuances he saw in the process.

“I don’t think that dispute over what Stapleton alleged as voter fraud was carried forward in any way by Democrats in the state,” Gernant said. “It was primarily combated by Republican clerk and recorders. The fact they were Republicans speaking against a Republican actually carried further weight and made this conversation seem less partisan than it otherwise would have been.”

While Gernant believes voters and not commissioners ought to choose their elections administrator, he suggested the county could find middle ground. Commissioners could leave the appointed administrator in place, but make it directly accountable to an elected official and not the county’s chief administrative officer.

“By doing that, you maintain the day-to-day operation in an appointed elections administrator, so you get the benefits of someone who’s not on the ballot running an election while the higher level policy decisions can be made by someone directly elected by the people,” Gernant said.

He added that that high-level could be him as the clerk and recorder.

Geoff Badenoch, a polling place manager and member of the county’s Elections Advisory Committee, also lobbied to keep the position as an appointed one. The issue has generated more comment and public interest than anything the committee has recently taken up, he said.

On a 4-3 vote, the committee voted to keep the job under an appointed official. It was the first time, Badenoch said, that the committee didn’t reach a unanimous conclusion.

“When voters don’t trust the process, we have a serious problem,” Badenoch said. “We stop being the land of the free and the home of the brave, and we become the land of the craven and the corrupt.”

Rep. Bryce Bennett, D-Missoula, agreed that the highest priority must be to retain the integrity of the election process. However, he argued that the county should move to make the position an elected one, just as it was in the past before it became a county appointment.

Ensuring the position is elected by voters would serve as the best tool to beat back efforts by some at both the state and federal level to suppress voter turnout.

“It’s about accountability,” Bennett said. “People who are elected are directly accountable to the voters, and I think there’s a lot of value in that. I want to make sure we’re fighting back against every (push) to make it harder to vote or for people to block access to our elections. The most powerful way to do that is to have the people of Missoula decide who runs our elections.”

Commissioners will decide later this month how to shape the position. Public comment will remain open through Oct. 20.