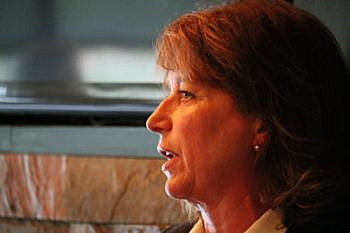 A candidate in Missoula’s race for mayor removed a post from her Facebook page on Wednesday afternoon after comments left by several supporters, including a candidate for City Council, took a racist turn.

Triepke, who has consistently posted local news articles to her Facebook page and interacted on social media, said she posted the story on Swaney in order to solicit feedback from her readers.

Swaney is a Native American.

“We have not removed any comments through the whole campaign – we want to hear both sides of everything,” Triepke said Wednesday night. “We want constituents educated on both sides and we’ve posted multiple stories from multiple sources.

“We posted that one because (Swaney) was on the ballot and when she resigned to go elsewhere, it left the council open to appointing a replacement rather than voters getting to chose.”

Triepke is backed by conservative supporters that include Wes Spiker of Spiker Communications and Diane Beck, a local real estate agent who serves as her campaign treasurer. They have been vocally critical of the city’s elected leadership.

On Wednesday, some Facebook observers criticized Triepke for waiting so long to remove her post, which was taken down after 2 p.m. Triepke, who works full-time at Cost Care and has four children, said she removed the post as soon as she “caught wind” of the comments it was generating.

She then posted the following statement:

“Hi all, it has come to my attention that a recent news article meant to inform voters has turned very ugly. For that, I am deeply sorry. I have not responded as quickly in the past few days due to various commitments. I want to apologize for not responding quickly to this situation as well.”

Earlier this year, members of Triepke’s campaign were critical of the Missoula Current’s own policy decision to discontinue commenting on its website, also due to the tone of some comments.

Triepke said she was reluctant to take the post down, but the tone of the comments forced her hand.

“It has been our policy not to remove posts or comments in the past but because this post has taken such a terrible turn, we will be removing it immediately,” she wrote on Facebook. “I do not condone racism or racist comments of any kind. We have shared news articles and posts in the past to inform voters not to fuel racist commentary.”

Greg Strandberg, a candidate seeking a seat on the City Council, left one of the comments on Triepke’s post as the conversation steered toward Christopher Columbus and Native Americans. In the past, Strandberg has called the mayor “Fat, drunk and stupid” and referred to Ivanka Trump as a “dumb ‘C—‘.” He was critical of Triepke at one point, though Triepke said they had made amends.

Several people had taken screen shots of Triepke’s post and the subsequent comments before she removed it. Others have questioned why Triepke hasn’t made greater efforts to separate her campaign from the likes of Strandberg or condemn the comments posted to her site.

“Perhaps she realized that encouraging grotesque racism on her page is a bad campaign strategy,” wrote Leigh Radlowski.

Triepke said she reached out to Swaney and her family to apologize.

“I reached out to Ruth and her husband to apologize personally,” Triepke said. “Our whole point to post it was to bring attention to the timing of her resignation.”