The first question posed by former Montana Public Radio news director Sally Mauk at the Missoula mayoral forum held Monday asked the two candidates who they voted for in the last presidential election.

The question and the candidates’ responses set the tone for the fourth in a series of mayoral forums, this one hosted by City Club Missoula before several hundred people.

The two candidates differed on most issues, from housing and jobs to the issue of homelessness. In many responses, Triepke referenced the city of Bozeman as a beacon of success, from its university and work with students to its latest efforts to address affordable housing.

Triepke, who works at Cost Care, said she’d address Missoula’s own housing challenges through the city budget and “not constantly raising property taxes,” which she blamed for the city’s rising cost of housing.

“Bozeman has just initiated the Larkspur project, which is coming up with 132 units of affordable housing, which goes to the low income,” Triepke said. “We’ve produced 27 units in the last year.”

While Triepke suggested Missoula could do more to work with local organizations to build affordable housing, Engen said the city already enjoys strong partnerships with both the public and private sector.

Several efforts are also underway to address the housing issue, he said, including the creation of the Office of Housing and Community Development, which is now writing a housing policy. Engen said the city’s limited housing inventory was the primary reason behind the rising costs.

“We’ve done unit after unit (of affordable housing), but we haven’t done enough,” Engen said. “It’s why we tipped up the housing office a year-and-half ago, our first-ever effort to be more intentional about creating housing opportunities for all Missoulians.”

“The cost of land, which is frankly the most significant cost of building housing in Missoula today, is tempered by the fact that some of the equity goes back into that trust and is shared,” Engen said. “We’ve done them on a relatively small scale in Missoula, and they’re certainly one of the tools in the tool box we’ll be considering as we work on housing policy.”

Triepke said she also supported the concept, saying it has worked in Bozeman.

“I think that’s evident in the project I referred to in Bozeman,” she said. “If we can partner with different groups and organizations in any effort to make more affordable housing, I think it’s a no brainer to be considered.”

Triepke also drew from Bozeman when asked what she’d do as mayor to maintain a strong relationship with the University of Montana. The school recently named a new president in Seth Bodner, who will assume his new role in January.

“What they’ve done (in Bozeman) with the entrance of the new president and leadership and the dynamic of cooperation and relationships they’ve built between the city and university is phenomenal,” Triepke said. “When you go to Bozeman and drive in, you can feel it electrically in the city.”

Triepke said that whether Missoula retains its incumbent mayor in Engen or chooses her for the office, the city has a “huge opportunity to reach out and form a strong partnership with the new president.”

“He seems so dynamic and ready to go, hit the ground running and work with groups in town,” she added. “I think we need to keep mindful of the research that comes out of our university and find local organizations that pair up with the students coming out, trying to keep them in town, get them jobs and watch out for the relationship we have in place.”

Engen sat on the committee behind UM’s recent presidential search and believes the Montana Board of Regents selected a qualified leader in Bodner. He believes the city and the university can work together in planning for the future.

“Modern campuses don’t have the geographical borders that have been traditionally established,” Engen said. “My hope is that by working with (Bodner) and his team, we can begin to engage in planning around innovation centers, which is work that’s been done in many communities around the county, and around the world for that matter.” 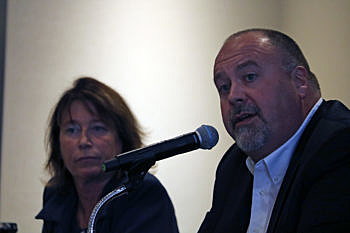 The two candidates had met three times prior to Monday’s forum, the last before ballots go out in the mail. In the past, several forums clung to the candidates’ talking points, though Monday’s event gave them room to expand.

On the issue of jobs, Triepke contended that the process of opening a business in Missoula is both convoluted and cumbersome. She advocated for a streamlined and simplified process.

“We need to simplify the process for businesses trying to come into town, and we need to take an approach where we target certain industries that we think have quality compensation and make those businesses feel at home and welcome when they come through the process,” she said.

Triepke again referenced the partnership she says exists between Montana State University and the city of Bozeman as a model worth observing.

“(Montana State) university is able to work with local business leaders to cross-promote the students with the businesses, so they have the students staying in town in Bozeman to stay and work and raise their families instead of leaving town,” she said. “Right now, I think we have an issue in Missoula with students leaving town when they graduate.”

Engen never responded to Triepke’s repeated references to Bozeman and MSU, but said in Missoula, the city has seen its share of economic success. It’s something he said is indicated in national surveys that rank the city high in startup and entrepreneurial activity.

Engen said the city has invested in the Missoula Economic Partnership as well and entrusted its board to help develop and pursue an economic plan. It also works with established companies who pay a living wage to help them resolve any challenges that hinder growth.

“Last week I had a conversation with a local company that hopes to have 500 employees within the next decade, and they want to do that in downtown Missoula,” Engen said. “We spent about an hour looking at opportunities both in terms of real estate and what the city can bring to the table through investment to make that a reality.”