When Mirtha Becerra sat in front of the Missoula City Council two weeks ago in something of a grilling job interview, her answers came clear and precise, and it worked to win her the job.

On Tuesday, Becerra stood in front of Missoula Mayor John Engen to take the oath of office, officially joining the panel of elected officials that had quizzed her the month before. In doing so, she’ll take the seat vacated by former Ward 2 council member Ruth Anne Swaney.

And she begins on Wednesday.

“It was one of the toughest interviews with all those people asking questions,” Becerra said after her swearing in. “I was happy to go through it, and it was impressive to see that many people from my ward apply for the position. Missoula cares about Missoula and that’s refreshing and it’s nice.”

Becerra, who saw her husband and two children attend Tuesday’s ceremony, has lived in Ward 2 for the past 13 years. She works as a land use and transportation planner with the city and has served as a board member and president of Homeword, a Missoula-based nonprofit that deals in affordable housing. 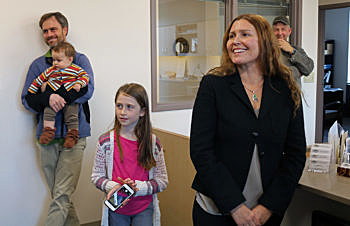 Last month, she joined eight other local residents in submitting an application for the vacant seat. In her application, Becerra said she’d witnessed many changes in Missoula over the past decade and believes her professional experience as a planner could be an asset to the City Council.

“It feels like a more complete picture of how our city functions, working for it before and now working with the different departments within the city,” she said. “I plan on working a little harder to tackle the issues we currently have, such as affordable housing and transportation and just making sure Missoulians thrive overall. It’s a great city and we’ve done so many great things and I just want to continue doing the same.”

Out across the city on Tuesday, nearly a third of Missoula’s registered voters submitted a ballot to help decide the rest of the City Council’s new lineup. While Becerra avoided a campaign showdown this Election Day, she’ll have to defend the seat two years from now when the remainder of Swaney’s original term expires.

For now, Mayor Engen is happy to have her on board.

“Each council member brings new and different perspectives,” Engen said. “What Mirtha brings is the experience of a planner, a mom in the neighborhood with a family and those responsibilities, and a bit of a global perspective. She’s thoughtful and smart – everything we want in a council member.”

Becerra graduated high school in Chile and earned her undergraduate degree in environmental studies from State University of New York at Buffalo, followed by a master’s in urban planning from the same school.

She has worked for the city of Missoula as a planner for nearly 13 years, minus the three years she took off to spend in South America. She gets to work on Wednesday when the City Council’s various committees meet, including the land use and planning committee.

“I’m excited and honored to work for and with the city of Missoula,” she said.