Voters stayed the course on Tuesday by giving Missoula’s incumbent mayor another four years in office, banking on the city’s steady progress over the issue of taxes raised by his opponent.

John Engen handily secured another term with a voter mandate of 58 percent. His opponent, Lisa Triepke, secured 41 percent of the vote.

“Enough people have entrusted me to continue to do this work and I’m honored and privileged and obliged to continue serving,” Engen said Tuesday night. “It feels amazing. I love the work and I love the community.”

A crowd of supporters gathered at the Public House in downtown Missoula, occasionally breaking into chants and cheers while waiting for the final batch of ballots to be counted. The results gave Engen 12,700 votes to Triepke’s 8,941, a spread of nearly 18 percent.

Engen, who was first elected to office in 2006, placed housing and economic growth at the top of his campaign list. The message resonated with voters, who see progress in the city’s growth, even amid concerns over the increasing cost of living.

“I heard a lot this cycle, more than I ever have about property taxes,” Engen said. “It’s clearly an issue on Missoulians’ minds and we need to do our best to address those concerns. It’s not easy – there’s no simple solutions. We need to continue to demonstrate value and be good stewards of the public dollar, and wherever possible find new revenue streams to provide some relief.” 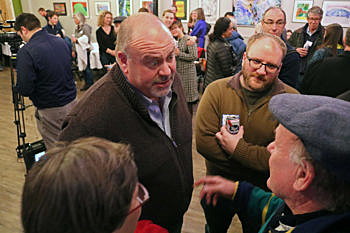 Triepke, who was one of two early challengers before the other candidate dropped out of the race, made taxes central to her campaign. However, she often struggled to identify areas where she would cut to save revenue, leaving many voters uneasy about her plans for the office.

Surrounded by supporters at the Iron Horse, Triepke declined to comment on the race Tuesday night.

“I continue to listen to people who do and don’t vote for me,” Engen said at his own election celebration. “I don’t anticipate everyone’s going to agree with me all the time. But I believe I have demonstrated over time the ability to listen and learn and I’m going to continue to do that.”

While the office of the mayor remains unchanged, the City Council will see several new faces. The two left-leaning candidates in Ward 4 split the vote, effectively handing the win to Jesse Ramos, a fiscal conservative who plans to “fight for lower taxes and better roads.”

“The City Council is going to look a little different, but I’ve become accustomed to that over the years,” Engen said. “Every two years, my board of directors has a change or two, and I think we’ll have some fresh faces that will bring new energy and new ideas to the table, and I look forward to working with them.”