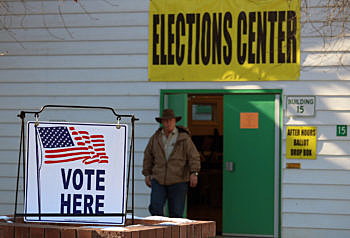 Over the last two elections, the Missoula County Elections Office buckled down when scrutinizing ballots, poring over signatures for proper matches and ensuring each voter properly signed their ballot.

The process resulted in more than 112 rejected ballots in November’s municipal election and 94 during May’s special federal election.

County election officials said the added scrutiny, which rankled some voters, resulted from allegations of statewide voter fraud levied earlier this year by the Secretary of State.

And while Corey Stapleton never proved his allegations, they nonetheless added pressure to Montana’s electoral process.

“The allegations of voter fraud really boiled down to a lot more work on the election side, and it’s detrimental to the process for voters,” said Bradley Seaman, Missoula County’s elections supervisor. “We were spending more time reviewing these signatures.”

After levying his allegations of voter fraud, Stapleton directed all county election administrators to conduct a survey of rejected ballots, saying if they didn’t do it then his office would.

The results of Missoula County’s survey took additional time, though it didn’t net any stunning results. It found that voters were honest, that mismatched signatures resulted from innocent mistakes, and that the county’s long-standing ballot review process works as intended.

“This is nothing new to us,” said Seaman. “This is a process we’ve been following for years. We’ve been working to make sure that when a ballot gets rejected, it has multiple points of contact.”

Carol Bellin, a county election aid, took the 94 ballots rejected during the May 25 federal election that sent Rep. Greg Gianforte to Congress and set out to contact voters.

Of those ballots, 39 were rejected due to mismatched signatures, 35 because they came too late, and 13 because they were missing signatures. Two had no ID and one was deceased.

Belling attempted to contact those voters personally for their feedback.

“I was going to mail my ballot on my way out of town but when I got to Las Vegas I found it still in my briefcase,” one voter explained after submitting a late – and rejected – ballot.

“My mom accidentally picked up my ballot thinking it was hers and signed it,” said another.

“My wife accidentally signed my ballot,” said a third.

None said they attempted to commit voter fraud.

“When I get them on the phone, people want to tell me right away what the situation was,” said Bellin. “It doesn’t match, so the system is working and it gets rejected. I really believe Missoula is the leader in the state, and this has been a progression over the years.”

During November’s municipal election, 261 ballots were logged as needing further review. Of those, 149 were resolved by the deadline and 112 were not.

Of those that were accepted, staff approved 58 previously rejected signatures and resolved 32 as household ballot swaps.

“I would hope the Secretary of State takes note of the effort we’ve gone through to retain the integrity of the voter process,” said Missoula County Commissioner Dave Strohmaier.