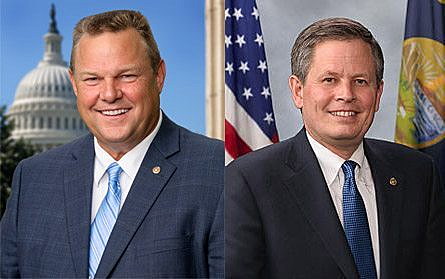 President Donald Trump’s announcement that the terrorist prison at Guantanamo Bay, Cuba, will remain open – and that more prisoners will be sent there – drew quick applause from Republican Sen. Steve Daines.

Since he visited Guantanamo Bay in March 2016, Daines has sponsored legislation to suspend the transfer or release of detainees at the prison, and to send captured ISIL fighters there as well as terrorists associated with al-Qaida and Taliban.

As Trump delivered his first State of the Union speech, the White House released a copy of an executive order reversing former President Barack Obama’s order to close the detention center.

The prison – which houses 41 terrorists – will remain open, Trump said, and will receive new detainees.

“We must be clear,” Trump said in his speech before Tuesday night’s joint session of the House and Senate. “Terrorists are not merely criminals. They are unlawful enemy combatants. And when captured overseas, they should be treated like the terrorists they are.”

“I applaud the president for making sure terrorists stay behind bars in Gitmo,” Daines said in his own news release during the State of the Union. “We cannot allow the world’s most dangerous terrorists to roam free and harm Americans.”

Daines was part of a congressional fact-finding mission to Guantanamo Bay in March of 2016, and came home to join 14 other senators in introducing a resolution to use the prison to house ISIL fighters.

Obama, meanwhile, attempted to close the prison from the first day of his first term in office. He failed, largely because Congress blocked the effort.

In April of 2016, Daines introduced legislation permanently banning the transfer of Guantanamo detainees to the United States and suspending the release of detainees internationally until Sept. 30, 2017.

In late May of that same year, he introduced a bill to temporarily ban the transfer of detainees from Guantanamo Bay.

Last February, Daines wrote Trump urging him to “strengthen the mission at Guantanamo in order to better safeguard Americans.”

Montana Democratic Sen. Jon Tester used the occasion of Trump’s first State of the Union address to reflect on his working relationship with the president over the past year.

Tester, who faces a stiff reelection challenge this year, followed up on remarks he made on the day Trump took the oath of office as president last January.

“I said I would work with him when I can and hold him accountable when I must,” Tester said just before Tuesday night’s speech. “And that’s exactly what I’ve done.”

He said the president’s address to Congress “spoke to Montana’s hardworking families.”

“I look forward to working with him to upgrade our infrastructure, secure our borders, boost access to better jobs, and improve care for our veterans.”

But Tester said he was disappointed that Trump did not mention Montana’s core industries, including farming and ranching and the services and amenities provided by federal public lands.

The state’s senior senator released bullet points showing both occasions when he has worked in tandem with the president and times when he’s held Trump accountable.

Tester said the president has signed 11 of his bills into law over the past 12 months, most of them related to veterans issues.

He’s met with Trump twice in the White House to discuss Montana issues and border security, Tester said. And he’s met with (after voting for the confirmation of) the majority of Trump’s Cabinet, including Ryan Zinke, Ben Carson, David Shulkin, John Kelly and Kirstjen Nielsen.

But Tester said he has clashed with a number of Cabinet members and taken sides against the president on several issues.

Specifically, he mentioned his opposition to the confirmation of Education Secretary Betsy DeVos, and his opposition to Interior Secretary Ryan Zinke’s moves to increase admission fees at national parks, decrease funding for the Land and Water Conservation Fund, and roll back protection of the Upper Missouri River Breaks National Monument.

As his guest for Tuesday night’s event on Capitol Hill, Tester took Border Patrol agent Brandon Judd of Malta, who is also president of the National Border Patrol Council.

“He is well-respected on both sides of the aisle – evidenced by President Trump’s recent tweet – and his input will play a critical role as we work toward a bipartisan solution on border security,” Tester said.

Danielle was born healthy, then a bout with the flu when she was 18 months old triggered a rare auto-immune disease that affected her joints and eye.

Without CHIP, she would not be able to receive the treatments that provide her with some relief from the pain caused by her juvenile arthritis, as well as a chance to fight back against the disease’s progression.

Following the president’s speech, Daines recorded his response and posted it online via YouTube, beginning with Dani’s story and his support for CHIP’s extension as part of the temporary government funding bill passed last week.

In addition, Daines said: “Tonight, we heard the president speak of a nation that is stronger and more secure. Together, we will secure our borders, we’ll improve our crumbling infrastructure, we’re going to pass a Farm Bill that’s good for Montana, and we’re going to address the national parks’ maintenance backlog.

“I very much look forward to working with President Trump, Vice President Pence and the administration on these important priorities. Let’s continue to Make American Great Again.”