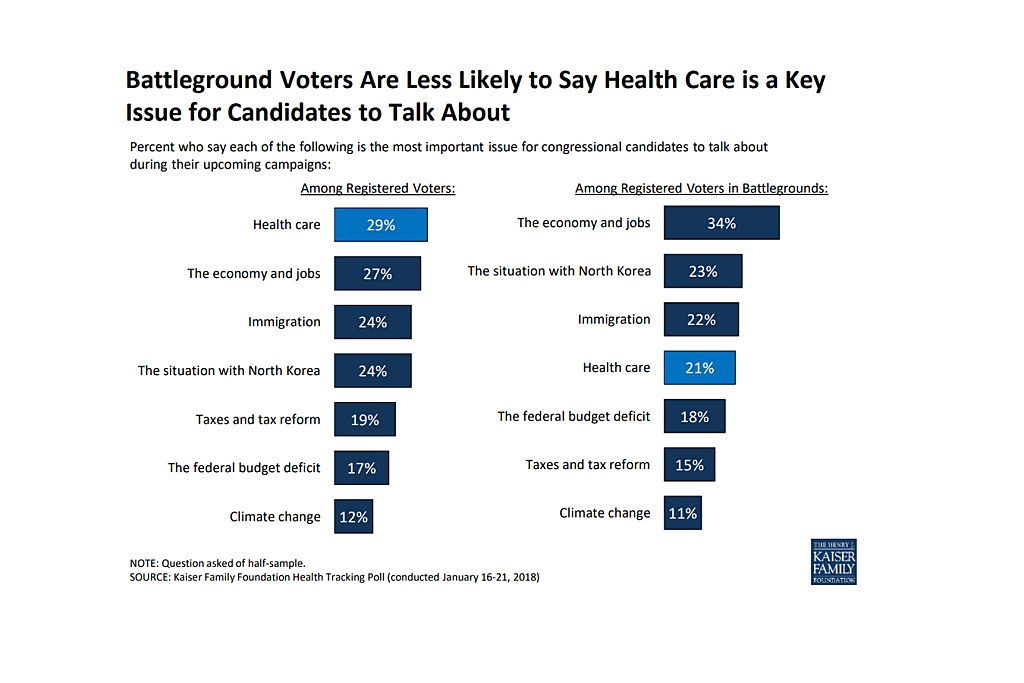 As the midterm elections approach, health care ranks as the top issue, mentioned more frequently among voters nationwide than among those living in areas with competitive races, a new poll finds.

In areas with competitive congressional or gubernatorial races, the economy and jobs ranked as the top issue for candidates to discuss, with 34 percent of registered voters listing it as No. 1, according to the poll from the Kaiser Family Foundation.

Following economics was the conflict with North Korea (23 percent), immigration (22 percent) and health care (21 percent). The competitive areas are 13 states with statewide races and 19 House districts judged as toss-ups by the nonpartisan Cook Political Report.

Nationwide, 29 percent of registered voters ranked health care as the most important issue for electoral discussion — though it was far more important for Democrats than Republicans. Economy and jobs were close behind with 27 percent of voters rating it most important, and then immigration, with 24 percent listing it.

The poll found that nearly half of Americans believed there is still a federal requirement for everyone to obtain health insurance, even though Congress’ tax bill last year repealed the penalties for that requirement in the Affordable Care Act, known as the individual mandate. Only a third of the public were sure that those penalties had been repealed.

Fifty percent of the public expressed a favorable view of the health law, while 42 percent disliked it. Six in 10 people said that since President Donald Trump and the Republicans in Congress have altered the law, they are responsible for any problems. Like other opinions about the law, there was a strong partisan split: Only 38 percent of Republicans thought their party is now responsible, while 77 percent of Democrats thought so. Half of Republicans still listed repealing the health law as a top priority.

There was less of a partisan split over the importance that the president and Congress address the epidemic of prescription painkiller addiction. Among Republicans, 43 percent rated it a top priority; 54 percent of Democrats agreed.